Maureen: Using one of my favourite British expressions, this was a bit of a damp squid.

Kirstin: I agree. Does that make it damp squid squared? I’m not sure I’d want to eat at her At Her Table every night. That sounds really mean, but it’s true.

Maureen: Nigella is so good and so inspirational it just seems a double disappointment.

Kirstin: I forgive her for that, unlike other people we could mention. {Editor’s note: She’s talking about Jamie and his recent slide into writing not-very-good cookbooks.}

Maureen: When I usually get a Nigella cookbook, it’s filled with post-its of the things I want to make. But not this time. I struggled to find something that I wanted to make.

Kirstin: I’m sure the next book will be a triumph.

Maureen: Her first books were all about getting as many people as you could around the table and enjoying a meal. It’s a philosophy that drives me to this day. But this book didn’t have that. The recipes were not inspiring. And she really didn’t talk about the communal aspect of food and how great that is, and that just made me sad.

[At this point, we lost interest in the cookbook and started talking about the Prince Harry and Meghan Markle engagement.]

We know you can do a great one the next time, Nigella.

“At My Table”
Overall Grade (A- F): B- (Kirstin)  C (Maureen)
Best recipes: Kirstin: Lime & Coriander Chicken and Indian Spiced Traybake. Maureen: Roasted tomato salsa.
Grade for Photography (A-F):  B.
Any disasters? Kirstin: No. Maureen: No.
Bookshelf or Charity Shop Donation? Kirstin: Low-rotation Bookshelf.  Maureen: I might give it to the charity shop because I know there isn’t anything in there that I’ll cook again, but then again, it is Nigella so I might hold on to it for sentimental reasons only.                                   Would You Give This Book to a Friend?: No. If I were to give a Nigella cookbook to a friend, I would give them “Feast.”

Our Verdict: At My Table 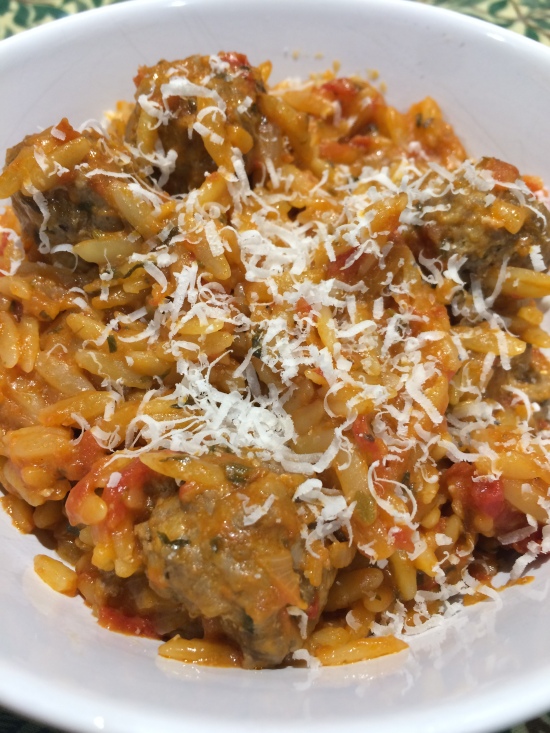 I was very much looking forward to cooking this recipe, as Nigella created a similar dish in “Nigellissima” that is eaten by this family so often that it’s practically in our food canon.

“Fake Risotto” (see the original post here and see the follow up post here) is so beloved that I’ve already taught 18-year-old Andrew how to make it so when he’s at university next year, he’ll be able to make it for himself.

Alas, this recipe had big shoes– or should that be bowls?– to follow, and it didn’t quite fill them.

To be sure, it was delicious. However, given that you make the meatballs and then poach them in the tomato sauce before finally adding the orzo, it takes more than an hour from start to finish. If I wanted to do something that labour intensive, I’d just make our very favourite meatballs and tomato sauce from Polpo.

It was good, I just won’t be making it again. I’ll either make the original fake risotto if I only have 15 minutes, or Polpo’s meatballs and tomato sauce if I’ve got more than an hour.

“Meatballs with Orzo” from “At My Table”

Maureen: I’m wondering if you could use wholewheat spaghetti instead of spelt spaghetti.

Kirstin: You probably could. But I liked the challenge finding it this morning. I almost bought soba noodles when I couldn’t find spelt spaghetti at the first shop.

Maureen: So where did you find it in the end?

Maureen: Not sure the kids would like it though because of the mushrooms, unfortunately because it is good.

Kirstin: What is it with kids and their whole texture nonsense? GRRRRRRR.

Kirstin: Unless you ate it all like we did!

“Spelt spaghetti with spicy sesame mushrooms” from “At My Table”

This is how I usually do it: 1. Make garlic butter. 2. Cut french stick horizontally. 3. Spread garlic butter liberally over each side of bread. 3. Sprinkle mozzarella (again, liberally) over the top of the garlic bread. 4. Put under broiler and watch like a hawk to make sure it doesn’t burn. 5. Eat with gusto.

I suppose we could call Nigella’s version a slightly more sophisticated take on this dish, as rather than banging two slices under the broiler, which is much quicker, you cut the bread vertically and then stuff the garlic butter and mozzarella between pieces. You wrap the whole thing up in aluminium foil and then roast it at 220C/400F for 30 minutes.

Is it better? I’m not sure. It definitely takes longer, and it looks nicer. But usually when I’m having cheesy garlic bread, I’m having it with pasta and that only takes 10 minutes to cook. So this version takes a bit of advance planning, which I’m not convinced is worth it.

But no matter how you make it, cheesy garlic bread is ALWAYS delicious.

“Cheesy Garlic Bread” from “At My Table”

Ella: Well this is succulent and juicy!

Kirstin: I have to admit I made this a few weeks ago for just me and Miles.

Miles: I remember it!

Kirstin: And we’re having it with pitta bread. This is such a wonderful summer recipe. My picture does it no justice and that’s because it should be photographed outdoors in evening summer light. Nigella, I apologise profusely. But really the rolling pin to squash the chicken does not work at all. I had to use a mallet in the end.

Kirstin: And I love it too. I haven’t done one of Nigella’s recipes where you stick everything into a freezer bag for a while for no good reason. Genius recipe. Also, I’ve just seen Call Me By Your Name, so the word succulent is taking on a whole different meaning because peaches.

Ella: I’m not sure I want to know.

Kirstin: It’s ok. There’s no way I can describe it to you. That said, I have loved this trilogy of films by Luca Guadagnino and in particular the way food is featured.

“Lime and Coriander Chicken” from “At My Table”

This recipe is peak Nigella: delicious and simple– so simple that I bemoaned the fact that I hadn’t thought to do this myself.

Essentially what you do to make this recipe is you put a load of tomatoes, red chillies, red onion, red bell peppers and garlic on a roasting tray, toss them in sea salt and veg oil, roast it for 40 minutes and then whizz it– either in a food processor or with a stick blender. See? Easy.

Nigella recommended 50 grams of red chillies, but I knew that was probably more heat than the boys could bear, so I only put in three. It still was hot, trust me. But also very yummy.

Would I make this again? Absolutely.

“Roast Red Hot Salsa” from “At My Table”

Kirstin: This doesn’t sound like much. You know, another traybake, another chicken recipe. But it is so much more than that. The potatoes and chicken are tossed and coated with an aromatic concoction of delicious spices before being roasted for an hour; it’s deceptively simple and yet everything about this recipe is perfect. Plus it worked. First time. Which is always a bonus. Miles told me that he loved my cooking as I put this on the table, so I’m going to thank Nigella for making one boy (and his mother) very happy. It tasted wonderful and will definitely, definitely, definitely be made again. Lots, I hope!

Also can I just say how I feel bad that Nigella’s books always come out in the autumn and I always end up taking pictures of her recipes in the dark. Because they deserve so much more. I’m going to have to make one of her cakes and take pictures of it in the daytime. I love a challenge!

“Indian-Spiced Chicken and Potato Traybake” from “At My Table”

Maureen: Look! It’s the patron saint of Cookbook a Month!

Kirstin: I am excited about this one. I think I preordered this back in June, back when I first heard about it.

Maureen: Initially I was pretty excited, but then the book came and now I’m not so sure.

Kirstin: I am the same, but we have high hopes for her.

Maureen: The problem is, when I was paging through it, while I did see several recipes that I wanted to try, I wasn’t consistently tagging stuff that I want to do, unlike in the past.

Kirstin: The clue is in the title: this is home cooking. It’s just really simple recipes. It’s just a different kind of vibe. We have to remember that while we’re cooking from it.

Maureen: She does excel at dishes you can throw together with things you probably already have at home or at least can find easily.

Maureen: She’s got some fun cocktails in the back, too. We should try some of those.

Kirstin: It’s a different kind of book from the book that she normally does, and we just have to take it differently.

Maureen: But she will always be our patron saint.

Cookbook of the Month, November 2017: At My Table: A Celebration of Home Cooking by Nigella Lawson