Anna: I am stealing Kirstin’s photo for this post in honour of the fact I made this because she loved it so much. All I can say is that we’ve had it three times in the last 3 weeks. It is quick, delicious, super easy and perfect for these hot summer evenings. Deceptively simple but absolutely wonderful. This book keeps on giving…..

Miles: I love it!

Kirstin: But you didn’t like this the last time I made it.

Kirstin: So this is the second time I’ve made recipes that weren’t appreciated the first time around. That’s definitely a lesson learnt for me.

Tom: The fish is delicious. And I love it when you make this salad.

Kirstin: Do you remember when I made this salad and served it with just a bit of cheese? It’s a perfect summer salad and such beautiful greens. And my goodness, Ella you’ve eaten all your fish too!

Tom: I think that means we’ll be having this again.

Kirstin: Too right! I adore sea bass. And it was a good excuse to  make some sourdough ciabatta to go with too! 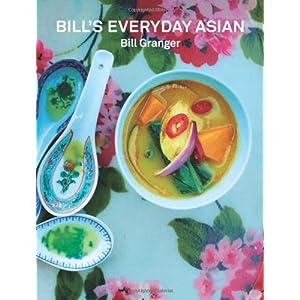 Anna: The tricky thing is I haven’t been able to make much from it.

Kirstin: I’ve made you a couple of recipes though.

Anna: Well, you have. And I have cooked a couple of things that I haven’t had time to put up on the blog.

Kirstin: I have a couple of those too.

Anna: And the conclusion from that is that there’s loads of recipes in this book that we wanted to cook, and did cook… well you and Maureen!

Kirstin: And I loved the photography. I thought it was inspirational. Mikkel Vang is my hero.

Anna: So, here’s the thing for me. There’s yummy salads for spring and summer. There’s easy go to recipes for noodles and stir frys and then there’s fancier things for dinner parties and for me this is the beauty of Bill and the way he writes his books.

Kirstin: I loved that everything was so easy to make. It really was an Everyday Book. Unusually for a cookbook, I was able to make things throughout the week that the children could also eat and I’m hoping that a trip to Asia might be on the cards since they really enjoyed the food, even chillis.

In retrospect, it was foolhardy of me to think that either of the boys would like something that has chilli in it. If you’re at all interested, see their past aversions in several previous posts. But the adults loved it, and frankly, sometimes that’s all that matters.

Andrew (11): I think this is nice. [Pause for consideration] Actually, I think it’s too spicy, even for me.

Maureen: I think this is more sweet than spicy, to be honest.

Tim: I wish it had more sauce.

Maureen: There is some more sauce, though not a lot, still in the pan. You could go get some.

Andrew: I thought it was nice, but too spicy. (Editor’s note: The boys now leave the table to take up their mother’s offer to have some cereal instead of stir fry for dinner. It’s their fall-back meal when they really can’t stand what I’ve made. The only rule is they always have to try things first.)

Maureen: I actually cut down on the chillies you were supposed to use. You were supposed to put three in there, but when it came time to adding them, I realised I only had one in the refrigerator. So one chilli had to be. I think it’s delicious.

Tim: Yes, this is really nice.

Tim: Is that a good thing?

Maureen: Maybe we wouldn’t want to model our culinary lives on takeaway foods, but every once in awhile, it’s a real treat.  If nothing else, it was extremely fast, which is always handy on a weekday night when the four of us have returned from four different places.

Tom: This beef is cooked perfectly.

Kirstin: It’s made me go and buy a new frying pan, but that’s another story…

Tom: I like the way the broth is a bit spicy as well.

END_OF_DOCUMENT_TOKEN_TO_BE_REPLACED

Miles: Mummy, I love this beef!

Ella: This is the most delicious pork I’ve ever had.

Miles: I think the same.

Kirstin: This was absolutely delicious. I would make this every week. Every day!

Ella: The outside bit on the pork is all salty and crunchy. And slightly burned. It’s really good.

Kirstin: It was incredibly easy to cook.

Tom: I love it. Burnt stuff, with sugar and chilli. What’s not to love? And it smelled amazing when it was cooking.

Miles: Mummy, everyone loves this beef! This beef’s delicious!

Kirstin: Can you remember what it was?

Kirstin: No, it was PORK!

Tim: What do you think?

Maureen: I am not a fan of this. It’s not disaster, but equally, it’s not very good.

Tim: It doesn’t seem like a dinner to me.

Maureen: Soup for dinner is absolutely fine, but this is too thin to be substantial.

Tim: That’s what I mean.