Kirstin: Maureen, you cooked many more recipes than me from this book. What did you think?

Maureen: As the teenager in the house would say, “Meh.” For the most part, I found the recipes a bit bland. They weren’t bad, exactly, but they weren’t outstanding either. Maybe this is the curse of putting out one cookbook every year. He’s just not inspiring any more.

Kirstin: Maybe I should have tried a bit harder, but I was put off by the few recipes I did try. I could see where he was going with the saving money part, but I also realise that I’m not part of that audience.

Maureen: Yes. I totally agree. He’s trying to get more people to cook more and be less wasteful, but since we already do that, we’re already ahead. I really like how he included recipes that used leftovers, particularly from Sunday lunches. Then you get two completely different dinners from one main one.

Kirstin: Save Jamie. That’s what we should be doing!

Maureen: Yes! Save Jamie from feeling compelled to do an annual cookbook! Maybe next time he’ll do something more aspirational, but I’m not holding out hope.

“Save with Jamie”
Overall Grade (A- F): Kirstin: E. Maureen: D. I would have failed it but for the inclusion of recipes that use leftovers. If they’re all as good as the Beef Rendang, he’ll be on to something and I’ll upgrade the grade.
Best recipes: Kirstin: None. Maureen:  Beef Rendang for the WIn! We really loved that. Also, the Mussel Pasta e Fagioli was delicious, though the boys didn’t like it as much as we did.
Grade for Photography (A-F): Kirstin: C: The usual closeup shots of Jamie holding up food. Nothing interesting.
Any disasters? No.
Bookshelf or Charity Shop Donation? Kirstin: Charity Shop Donation, for sure. Maureen: I might hold on to it for a bit longer and try some of the other leftover recipes, but if they turn out to be as uninspiring as the rest of them, it’s off to the charity shop for sure (though I will photocopy the beef rendang recipe first.)

“Save with Jamie” – Our Verdict

Tim: I had this when I was in SIngapore, and it was fantastic.

Maureen: I’m pretty sure this isn’t going to be as good as the one you had in Singapore, but let’s see. [Pause to taste.] Wow. This is delicious.

Tim: Beef Rendang For The WIn!

Maureen: I am so surprised this is so good. This is the best recipe we’ve had out of this book so far. It’s really flavourful, and even better, we used up the leftover brisket from Sunday Lunch.

Tim: It’s not often we have leftover brisket, though.

Maureen: That’s true, but one of the only things I like about Save WIth Jamie is he gives you recipes to use with your leftovers. This is a great example. We got two completely different delicious meals out of  one main meal, in this case, the brisket.

Tim: Though you didn’t use the Jamie brisket recipe, though.

Maureen: No, I didn’t. I thought it would be too plain, as most of the recipes in this book have been. Also, I wanted to use our pressure cooker so the cooking time would be much quicker. So I went off piste and used another brisket recipe. {If anyone is interested in the brisket-in-the-pressure-cooker recipe, let me know in the comments and I’ll post it. It was really, really good.}

END_OF_DOCUMENT_TOKEN_TO_BE_REPLACED

“Beef Rendang” from “Save With Jamie” 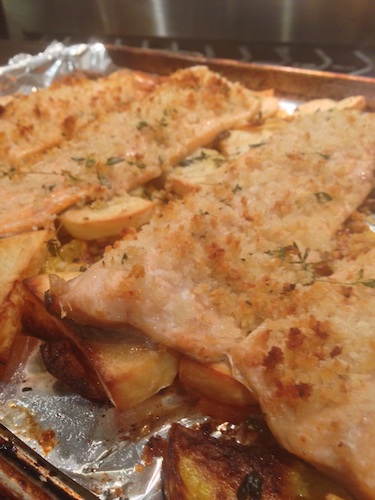 Maureen: Fish Friday! (Editor’s Note: This is another Fish Friday special, but as we have no Fridays left this month, I’m posting this on a Tuesday.)

Tim: What is it today?

Maureen: Trout again. I’m becoming a big fan of trout. I have to say, when I bought it for the first time a few months ago, I thought it would be all fishy and not very good. How wrong I was. It’s got a lovely taste and not at all fishy.

Tim: And no air miles! Where is this rainbow trout from?

Maureen: Hampshire. Also, it’s very, very, cheap, particularly when you compare it to other more popular fish. All four fillets cost me only 7 quid. What a bargain. What do you think?

Tim: This seems an awful lot like that other fish we had with breadcrumbs.

Maureen: That’s a Gwyneth recipe, and now a firm family favourite. This one is different in that you roast the butternut squash and potatoes for 50 minutes, then you add the fillets with breadcrumbs for the last 12 minutes. Also, you’re supposed to add oats to the breadcrumbs, but I only realised that at the last minute and we didn’t have any, so that didn’t go in.

Maureen: I think we probably will have this in the future, though I imagine that it would be a combination of the Gwyneth recipe– using her method for the breadcrumbs– and this Jamie one– using his method of roasting some veg and potatoes first. Then we’d be on to a winner.

“Trout al Forno” from “Save With Jamie”

This is called “Secret Steak” because Jamie is encouraging us to go beyond the usual cuts– fillet, sirloin, rib-eye and rump– and try skirt steaks instead, which are much cheaper but taste good. I’ve got news for you Jamie: Been there and done that.

We discovered “Secret Steaks” for ourselves back in June when we had “Bavette a l”Echalotte” from the Skinny French Kitchen. We liked it then, and we like it now.

It’s still a top tip from Jamie. However, in this particular instance, our butchers were out of skirt steaks that night, so we went with rump instead. It’s not as expensive as going for a sirloin or a fillet, but it cost more than the humble skirt steak. The dinner was delicious, but I’m not sure this counts as a faithful test of the recipe since I didn’t use the skirt steak.

The other thing I didn’t do– and will never do, to be honest– was use the frozen green beans called for in the recipe. There are several reasons for this. First, it is difficult, if not impossible, to find frozen green beans at the local shops. I tried a Sainsbury’s, a Co-op, a Waitrose and another Sainsbury’s, and couldn’t find them anywhere. Second, when fresh beans are plentiful and not that expensive, why in the world would you use frozen? So I used fresh, but consequently couldn’t follow the recipe as written.

The mushroom sauce was nice, but frankly not that different from any number of other mushroom sauce recipes I’ve used over the years. Fry onion and mushrooms, add cream, mustard and a splash of water. Hardly rocket science.

Finally, the other thing I didn’t do was follow the quantites for the amount of steak. Nicholas, 10, watched the program where Jamie made this (I missed it) and reported the next day, “He didn’t use much steak. That’s not how I would do it.” I can see what Jamie is trying to do– stretch the meal for as much as possible, which means cutting back on the steak to bring down the cost– but it’s not how I would do it. If we’re going to have steak for dinner, we’re going to have STEAK FOR DINNER, which means everyone gets his or her own steak. People (read: my family) wouldn’t be happy if they just got a few small slices of beef.

So would I make this again? As I haven’t even properly followed the instructions the first time, I’m not sure I can answer this question. Would I have steak for dinner again? You bet. But I don’t think I’ll be doing it the Save With Jamie way.

Here’s the recipe from Jamie Oliver’s website. But since I didn’t follow it, I”m not sure you should either. Click through this link to see for yourself. Share any thoughts you have about it in the comments.

“Secret Steak & Chips with Garlicky Green Beans” from “Save With Jamie”

If you’d like to see the recipe, and then maybe make it yourself, there’s a copy of it here, which you can find by clicking through this sentence.

Maureen: Indeed yes. We are veterans of these. Jamie is a big fan of them, but so is Nigella. I can understand why. All you have to do is get the ingredients together, and then just chuck it in the oven and bake it. Job done. What do you think?

Tim: It’s not unlike a lot of the other traybaked chickens we’ve had.

Maureen: That’s fair. But if you wanted a basic traybaked chicken recipe, this would work. Then you could change it to suit your own tastes. What do you think boys?

Maureen: The thing I’ve always liked about traybakes is that they’re really easy and the results are almost always delicious.

Tim: This one is good, but frankly, it’s not much different.

Maureen: That’s fair. But you know what’s really annoying? In the index, this recipe is difficult to find. It’s not listed under chicken, which you would expect, or under T, for traybaked chicken. It’s listed under its full name, Hit ‘n Run Traybaked Chicken, under H. Who would ever look there? So in summary, the recipe itself is fine, but the book indexing is absolute rubbish.

“Hit ‘n’ Run Traybaked Chicken” from “Save With Jamie”

Miles: I love the noodles.

Miles: But what is on the chicken? I don’t like it.

Kirstin: And I’m pretty sure you won’t like the vegetables either. I don’t think I’ll be making this one again; it really is nothing special. I rather liked the smell of the Chinese five spice as I cooked it though. And I totally forgot to take any pictures. Apologies. I’m starting to think this book should be called Save the Jamie!

“Sticky Chicken Chinese Noodles” from “Save with Jamie”

Maureen: When you say, “awhile,” what you really mean is “two weeks.” One of those weeks you were in Switzerland for work, and the other week we were at a play. So it’s not as if we’ve abandoned Fish Friday or anything.

Maureen: So glad you asked, so I can add a gratuitous description to our dialogue. It’s mussels, but with a difference.

Andrew: I’m not sure about the mussels.

Nicholas: Neither am I. They look weird.

Maureen: You guys don’t know how good you have it. You didn’t even need to take your mussels out of the shells. I did that for you. That’s love, if you ask me.

Tim: I’ll bet you can’t even identify the mussels.

Maureen: He’s got it right. It looks like he does know.

Tim: Well, I really like it. It gives you more substance than traditional mussels, when you just get mussels and a sort-of-soup.

Maureen: I agree. It’s great. It’s too bad the boys can’t see the greatness in this dish. Maybe next time, they’ll just have the pasta e fagioli and none of the mussels. Then we’ll all be happy.

Tim: You should make this again.

Maureen: I will. I really liked this.

“Mussel Pasta e Fagioli” from “Save With Jamie”
A cookbook a month
Blog at WordPress.com.