Maureen: This is a great book for you guys, because you love Asian food.

Kirstin: We certainly did.

Maureen: What did you love about it?

Maureen: Was there anything you didn’t like about it?

Kirstin: I didn’t like was that most of the recipes were written for two people, but once I figured that out, I scaled it up so we could all eat. I didn’t think the steps were written in the right order. I’m no expert, but they weren’t in the order that I would have done them.

Maureen: We might not technically be experts, but I think we’ve been cooking long enough that we know what we’re talking about.

Kirstin: But one of my big bugbears was that you couldn’t put all of the liquid ingredients together and add them at once. You had to add each one individually, which isn’t efficient, when you’re cooking on a wok and need to get it done. But Maureen, what did you think of the recipes you did make?

Maureen: The ones I made we liked, they were pretty good. One night, though, after we ate quite a good stir fry, we decided that one stir fry tastes a lot like the next one. Also I was disappointed that the vegetarian and vegan section included a lot of fake meat, rather than just focussing on using vegetables. I’m not a huge fan of meat substitute- just use vegetables instead.

Maureen: Just so you know, it goes off quickly, so use it now.

Kirstin: I am on it.

Our verdict: Wok On

Kirstin: Miles had his braces tightened today so we weren’t sure he would be able to eat the chicken. But by the end of the meal he was asking when we were having this again. This recipe was perfect for today’s cold weather; all the chilli and gochujang. I put all of the ingredients that are added to the water in a bowl to simplify things. And I’m already figuring out when I’ll be making this one again because this is the reason this book will stay on our high rotation shelves.

“Chilli chicken and Chinese broccoli noodle soup” from “Wok On”

Kirstin: We have just returned from a week in Sri Lanka. A week where I ate curry for every meal. Yes, even breakfast. With hoppers too. I am now curry in human form. So this was a lovely recipe to come back to with all the usual Asian flavours I do so love. I always think the trick with stir frying is always to get everything ready first. So for instance, this recipe asks for us to add a variety of things including things like sugar and black rice wine vinegar to the hot pan. I always make sure to read these kind of recipes beforehand because it’s much simpler to get all of those liquids prepared beforehand in a bowl. Then you can add them in one go. Stir fries are stressful enough and so time pressured, I find it makes the whole process calmer. That’s just my thinking. Anyway. We all loved this recipe. I’ve started to get used to the fact that the recipes are often for 2 and have learned to scale up. The sauce was gorgeous and the overall recipe will definitely be made again. Yum! 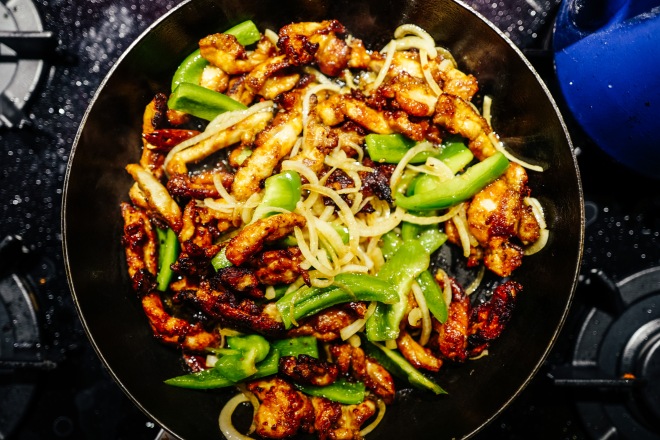 Kirstin: I have been waiting to make this ALL WEEK. And I was not disappointed. I should add that I don’t often deep fry things so this was all kinds of goals for me. This book not only has fabulous recipes, the time it takes to prepare AND cook each recipe, separately. But also the calories per serving. Which is useful if you’re into that kind of thing. Or scary if you’re not. I am all about the data so I am completely loving all the numbers. Oh and the recipe itself was DIVINE. I’ve already been asked when I am going to make this again. So there’s that.

“Sweet spicy chicken with crispy green peppers” from “Wok on”

Kirstin: Miles asked me what a laksa was the other day. So I explained it’s like a soup, with coconut milk. And they were all the rage before ramen came along. I know I used to have a recipe for one that I used in heavy rotation a good long while ago. So this was like having an old friend around again. Plus I do so love making a paste and then frying it up into a soup. You may have noticed that the title of this recipe involves the word cod but she also suggests using prawns as an alternative. So I decided to do that instead. This was perfect for a cold, windy week day. Next time I will remember the coriander!

“Chunky cod laksa” from “Wok On” 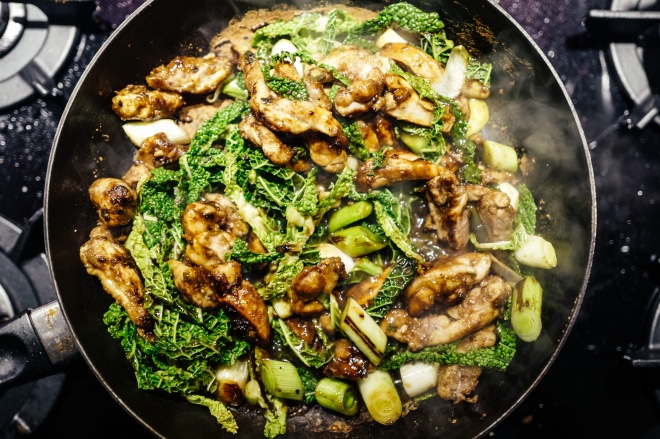 Kirstin: Just wow! All those amazing Asian flavours. And oh how I have missed making stir fries. Tom helped me prepare all the ingredients and I had forgotten how fun it is to make things together like this. And then we gobbled this ALL up like nobody’s business. Miles was not convinced however, but I suspect he doesn’t like Chinese five spice. YET. If you want to do this all vegan you can use mushrooms instead of the chicken. I bet that would be incredible. I might have to try it sometime…

Kirstin: I have missed Thai flavours SO MUCH! And this was a perfect way to start this month. A classic red Thai curry, with cod. Miles told me he would rather eat broken glass than salmon, so there is that! And even though it was super tasty, I had some issues with this recipe. She asks you to sear the cod. I wasn’t sure if this was both sides. Or just the one. Also when she tells you to poach the fish, it wasn’t clear whether that meant with the lid on the wok, or not. I put the lid on.

But all in all it was a promising start to this book.

Maureen: Have we ever done an Asian book?

Kirstin: I don’t think we have. My family is going to love this.

Kirstin: All of it.

Maureen: Again, it hits that sweet spot of getting meals done in 30 minutes. We know from bitter experience that’s sometimes not true. But we also know from more enjoyable experiences that sometimes it is. We’ll see what happens this time.

Kirstin: I have a whole Asian section in my kitchen that I’m ready to use for this book. Things like soy sauce, fish sauce, that sort of thing.

Maureen: I don’t have an Asian section, though I do have fish sauce and soy sauce. But I’m ready to try.

Cookbook of the month, February 2020: Wok On by Ching-He Huang