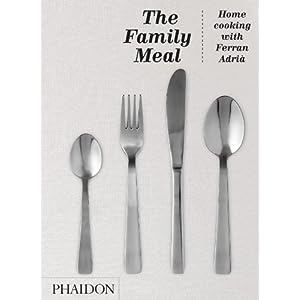 Maureen: This book has been a DISASTER!

Kirstin: You have been much better than me though. I gave up on week 2. I think it was when I saw your chocolate biscuits post that I lost the will to live.

Maureen: Yes, that was yet another epic disaster from this cookbook.

Kirstin: So, I hope he doesn’t actually feed his staff these menus. I would be really pissed off.

Kirstin: Yes, you have a good point there. I still think it’s a rubbish book. It will be going to the charity shop.

Maureen: Also I think the problem is this is more normal food as opposed to the normal gastronomy to the usual food he makes.

Kirstin: It almost put me off the idea of going to the restaurant, even though I know it’s closed. If he can’t get the basics right then what hope does he have with fancier food?

Maureen: I was never on the El Bulli bandwagon anyway where food is less like food and more like performance art.

Kirstin: So we should do Heston’s book next month then, right? It says it’s a family book….kidding!

“The Family Meal” – Our Verdict

Maureen: We have another epic disaster on our hands, boys.

Maureen: Well, I know this tomato sauce looks OK now, but that’s only because I had to completely disregard the recipe in the end to make it edible.

Nicholas (8): Oh no. Did it not have enough flour again?

Maureen: This time, it was a case of too much of something, in this case olive oil, rather than too little, like the flour in the chocolate cookies. I wanted to make about a jar’s worth of sauce, so I doubled the amounts for the 230 grams of sauce. Unfortunately, using my higher-level maths skills of doubling amounts, that meant he wanted me to use 240 millilitres of olive oil.

END_OF_DOCUMENT_TOKEN_TO_BE_REPLACED

“Spaghetti with Tomato & Basil” from “The Family Meal”

Maureen (looking over at the plate of Andrew, 12): Gold star for Andrew! He ate all the fish.

(Andrew puts his arms in the air, triumphantly.)

Andrew: Meh. I thought there were too many small irritating bones.

Where did our bodies go? Oh, wait, I know. Into the stew.

Tim: I like that it is good for me.

END_OF_DOCUMENT_TOKEN_TO_BE_REPLACED

Maureen: This is really good, but it’s got to have one of the least inspiring names for a dinner. Sausages with mushrooms? While it is accurate, it’s hardly the sort of name that’s going to get you inspired to get the pans out.

Nicholas (8): I like the name I came up with: Sausage meatballs!

END_OF_DOCUMENT_TOKEN_TO_BE_REPLACED

“Sausages with Mushrooms” from “The Family Meal”

Miles: I love this pasta mummy!

Tom: Wow. You ate the pasta, and a lot of the sauce!

Ella: That piece of tomato looks like an eyeball. So I’m not going to eat it.

Georgia: It was yummy.

END_OF_DOCUMENT_TOKEN_TO_BE_REPLACED

“Pasta Bolognese” from “The Family Meal”

The scene: While I get the supplies in order before we start, Nicholas, 8 is reading the ingredient list and recipe.

Nicholas (8): It says here we need two teaspoons of flour. That doesn’t seem right to me.

Maureen: Nor me. Here, let me have a look. (Looks at the cookbook.) You’re right. It says two teaspoons of flour to make 20 cookies. Maybe we don’t need as much flour because we’re freezing the dough.

Nicholas: It seems to me that it’s not right.

Maureen: You would know. You ARE my No. 1 assistant, especially when it comes to baking.

Two hours later, after the dough has been frozen…

Nicholas: This is a DIS-AS-TER!

Nicholas: It’s a good thing you’re not on the Great British Bake Off today.

Maureen: You’re right. This might be a disaster, but lets bake them, just to be sure.

Nicholas: Baking them didn’t make any difference. This is an EPIC disaster.

Maureen: Epic might be overstating it a bit, but it’s not good, that’s for sure. Let’s taste them…

Maureen: No, they don’t, but nor do they taste good. This was, as Andrew would say, an epic FAIL.

Do you see those chunky chocolate cookies pictured in the cookbook?

Do you see the flat, flacid cookies in the foreground? That’s what we ended up with.

I can only conclude with one word: #FAIL.

Maureen: OK. There’s a first for everything. This recipe, from the new cookbook, actually had crisps in the list of ingredients.

Maureen: I know. When I first read the recipe in a list, I thought it meant I was going to have to make them. Nope. I just had to make sure to throw them in the shopping basket.

Nicholas: I am having a double cheeseburger!

Maureen: No, you’re not. It’s just a cheeseburger.

Nicholas: Yes, I am. It is a double cheeseburger because I have two pieces of cheese.

Not Pictured: The Potato Crisps. I completely forgot they were part of the “real meal.” I still can’t get over they were listed as an ingredient in an El Bulli cookbook, regardless if it was the “Family Meal” or not.

Maureen: What do you think of the burgers?

Andrew: They’re OK, but I like the burgers from Drings better.

Maureen: That’s interesting. The mince was from Drings, so it shouldn’t be that different.

Andrew: And yet it is. I like the other ones better.

Nicholas: I like it, but I can’t finish it. Can I save it for later?

Maureen: You can’t finish one cheeseburger?

Nicholas: No. It seems HUGE to me. But I did like the crisps.

Andrew: So did I.

Maureen: I hate to tell you this, but the crisps don’t count. While these were nice, I think in the future, we’ll just get hamburger patties from Dring’s and crisps from just about anywhere.

Tom: So, what’s different about this chicken recipe?

Kirstin: It’s one of those chicken recipes that doesn’t use any butter where you cook it at a higher heat throughout. And you cook it breast-side down for a bit first.

Tom: Aha. That’s why there’s less crispy skin. Some of it got stuck to the pan.

Kirstin: Yes, sorry about that.

Tom: Well, I shouldn’t really eat an entire chicken’s worth of skin every weekend really. Given that there was no butter, this was very moist.

END_OF_DOCUMENT_TOKEN_TO_BE_REPLACED

“Roast Chicken with Potato Straws” from “The Family Meal”

Maureen: This is home cooking with Ferran Adia, from El Bulli.

Kirstin: El Bulli without the foams or fancy cooking.

Maureen: Our copy has been signed by the man himself and he says that good food feels the soul.

Kirstin: Maybe your recipes will work better than mine then, having been sanctified by the great man.

Kirstin: It’s like a throwback to the seventies. Just look at those colours. Some of the pictures are, I have to say are redundant. But I am not going to go by the pictures alone after the Donna Hay month.

Maureen: Yes, you learned your lesson there, didn’t you?

Kirstin: Hmmmm…..now is there anything you’re looking forward to cooking this month? I’m eyeing up the bolognese as I’m always on the look out for a good pasta recipe.

Maureen: There seem to be a lot of fish recipes which is always good. I think although the name El Bulli is daunting but the recipes themselves look pretty straight forward.

Kirstin: They certainly do. And I like the way he scales the recipes up and down depending on numbers of people. Not that I cook for 75 people every day of the week, but if I did I would make sure to use this book.

Cookbook of the Month, March 2012, The Family Meal ; Home Cooking by Ferran Adria