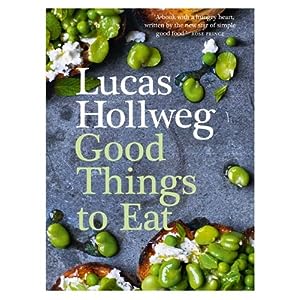 Anna: Kirstin, you obviously loved this book. You said it was your new favourite — Jamie Oliver mixed with Nigel Slater! Is this true?

Kirstin: Yes, this is my new favourite ever. I didn’t even blog about all the recipes I cooked this month. There was the roast chicken and aîoli. And the grilled sole. Both were yummy!

Anna: What was your previous favourite book?

Kirstin: Probably Bill. Or Gordon. I was surprised by how much I enjoyed the month of Gordon. And before that, Bill. I have a soft spot for Bill’s books. And there’s a new one later this year. Yay!

Anna: I’m not sure about Lucas though.

Kirstin: How can you say that?

Anna: I haven’t cooked as many things as you, but of the things I’ve cooked… the crab spaghetti was fine, but I won’t be cooking it again because it has this ridiculous extra step with the breadcrumbs.

Anna: That’s because Kirstin chose all the good ones before I could get to them! And this whole mint obsession is ridiculous. He keeps saying to put huge bits of it in there.

Kirstin: Yes, that is ridiculous. But I love his use of his words, and the way he has a recipe for every occasion. And it’s simple and delicious. That’s what I want from a cookbook: simple, delicious and being able to use it every day.

Anna: Did you feel it was different enough from other books?

Kirstin: He wasn’t trying too hard, like Jamie. Or Nigel with his ridiculous garden.

Anna: Most of the recipes he has in there, I have versions of in other books.

Tom: Yes, but he often has a new twist.

Kirstin: His meatballs have spices. And who would have thought to put onions in carbonara? It was amazing.

Anna: Butnormal carbonara is easier: no slicing of onions, no cooking of onions….. that extra step again.

Tom: I want to see where he’s going to take this. Jamie it trying too hard because he’s done everything and he needs a high concept for each book. Lucas is talking about his dream of selling up and moving to the country. I sense another book, plus a TV series. You mark my words.

Kirstin: I hope so! I would watch his TV series. He really enjoys food. He’s not doing it to show off, or to prove anything. It’s just simple, yummy food.

Anna: Yes. But the stuff I cooked just wasn’t that simple. I will probably make the lamb and gratin again, but I’m afraid this isn’t going to be a “go to” book for me, lovely as it is.

Kirstin: I have already given this book to people and they all love it too. And there are more recipes I haven’t cooked yet. It’s definitely on the “keep it in the kitchen” book shelf.

“Good Things to Eat” – our verdict

Two things I need to admit immediately. First, I lost the notes I made for both dishes, so there’s no dialogue. Sorry. Second, we didn’t have them on the same night. But since this is the penultimate day of the month, I need to put them together for my last post on “Good Things to Eat.”

First, the beef with the chimmichurri. Since my parents had just arrived from the U.S. to visit us, I bought a beautiful rib joint from Drings. Look at the picture below if you don’t believe me when I say this was a thing of beauty. Sure, it was expensive, but worth it.

The chimmichurri was absolutely delicious. For those of you who don’t know, chimmichurri is a sauce used in Argentina with beef. It’s made up of parsley, olive oil, garlic, vinegar and a bunch of other things. When blended together, it makes a lovely green sauce. . We all loved it. I will definitely be making this again the next time we have steak.

END_OF_DOCUMENT_TOKEN_TO_BE_REPLACED

Georgia: Can I just say… this is lemon sorbet number two! But with strawberry ice cream.

Kirstin: Then it’s not lemon sorbet at all!

Georgia: I love it.

END_OF_DOCUMENT_TOKEN_TO_BE_REPLACED

Tom: Well, Lucas hits it out of the park again. Yum!

Tom: I am not an expert on sport. You might say. I don’t think there is a home run in cricket.

Kirstin: Getting a 6. Isn’t that the same thing in cricket? I can do tennis! But I don’t think they have a name for hitting the ball out of the court, for obvious reasons.

Tom: Right. Well, anyway, this was fantastic. Just what I like.

Kirstin: Yes, it made the house smell amazing. And you’ve already asked if we can have it again.

Tom: Well you did ask if we should do it with the chicken skin on.

END_OF_DOCUMENT_TOKEN_TO_BE_REPLACED

“Chicken with fennel, lemon and thyme” from “Good Things to Eat”

Kirstin: That was the best lamb and the best gratin. Ever. I had seconds!

Kirstin: I never have seconds.

Tom: It smelled fantastic when the lamb was cooking.

END_OF_DOCUMENT_TOKEN_TO_BE_REPLACED

“Stuffed leg of lamb with spinach, feta and olives”, “Aubergine, courgette and basil gratin” and “Strawberry and lemon curd tart” from Good Things to Eat

Andrew: There’s too much rocket. It gives it too much flavour.

END_OF_DOCUMENT_TOKEN_TO_BE_REPLACED

“Spaghetti with ricotta and herbs” from “Good Things To Eat”

Anna: Have you worked out what the mystery ingredient is?

Anna: Correct. I had to fry them with chilli and garlic and sprinkle them on the top.  What do you think?

Peter: Well they do add a certain crunch to proceedings.

Anna: Hmm. Mine have gone a bit soggy now I’ve stirred them around.  I’m not convinced, and they add an extra step which isn’t required in any of my other crab spaghetti recipes.

Peter: The watercress was an interesting addition as well.

Anna: I’ve seen this in other recipes. Nigella’s has it for example.  We loved that recipe.

Peter: The watercress was nearly your undoing this time….

Anna: I forgot to buy it, yes. I’m a numpty. But Sainsburys in Holborn Circus saved the day. We can’t have a day go by without me forgetting something.

Peter: I’ve enjoyed this, but I’m not sure it’s screaming winner to me.

Anna: You’re right. I can’t not like crab pasta, whatever the recipe. But the extra steps involved with this one, making breadcrumbs and cooking breadcrumbs, is enough for me to turn to Nigella/River Cafe/Bill instead.  Sorry Lucas.

“Spaghetti with crab and mint” from “Good Things to Eat”

Kirstin: This recipe is the reason I bought this book. I thought that if somebody chose to do a chapter on “things on toast”, and could make it look so nice, the least I could do was buy the book. And that was absolutely yum.

Tom: It was indeed. We made extra slices it was so good.

Kirstin: You did that thing where you don’t talk when you’re eating. Which is always a sure sign that it’s yummy.

Tom: And that was really good. I loved the garlic — was it just scraped on the toast?

END_OF_DOCUMENT_TOKEN_TO_BE_REPLACED

“Peas, broad beans and ricotta on toast” from “Good Things to Eat”

Maureen: How is that then? Please explain.

Nicholas: Cod is always the fish I pick when I have fish and chips.

Maureen: That explains the overfishing problem, then. What do you think, Tim? This is your Father’s Day special.

Tim: I’m really excited about having lentils. We never have lentils.

Tim: How could you not? They’re delicious.

END_OF_DOCUMENT_TOKEN_TO_BE_REPLACED

“Cod with Lentils, Rocket and Salsa Verde” and “Go-with-Anything Cake” from “Good Things to Eat”

Kirstin: So, what do you think of these?

Miles: It’s delicious. I think it’s good. What’s that in the middle?

Kirstin: A raspberry. Would you like me to make it again?

Miles: Yes please. My favourite Megyptian person is Anubis. And all the other Megyptian gods. Even that flying person and Tutankhamen.

END_OF_DOCUMENT_TOKEN_TO_BE_REPLACED

“Little almond cakes with raspberries” from “Good Things to Eat”
A cookbook a month
Create a free website or blog at WordPress.com.