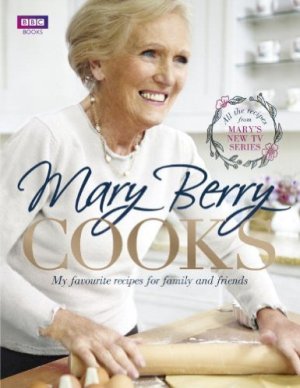 Maureen: What did you think?

Anna: I was surprisingly disappointed with the outcome of the recipes. Not just the fact that some were bland, but some of the recipes didn’t work properly for me, and I was very surprised by that. If there’s one thing you know about Fragrant Mary, I though her recipes would be dependable and some of them weren’t. Some were real failures.

Maureen: I know what you mean. For me, they weren’t bad, exactly, but they weren’t good either. The Triple Tomato Risotto is a perfect example. I thought it would be great, but it wasn’t. It was really disappointing.

Anna: But I also had some real successes which I’ll be making again.

Maureen: The chocolate tart I made was absolutely a winner. Everyone already wants to know when I’ll be making it again.

Anna: I want to make the Suacy Brownie Pud but I’m waiting for people to come over. I’m sure it will work. The double chocolate chip cookies were also good. The secret was the self-raising flour. I wasn’t convinced when I was doing it, but it really did work. It made the cookies more cake like.

Maureen: I think we can say that she’s very dependable when it comes to the puddings.

Anna: Well… you say that, but I made the bananna cake yesterday and it was flat. It didn’t rise.

Maureen: That’s unfortunate. As much as I love Mary Berry, I have to say this book definitely felt like a throwback to an earlier time.

Anna: Let’s say it will be popular with ladies of a certain age, but those of us who developed our culinary skills through the Jamies and the Moros and the Nigellas of the world, it’s not going to appeal.

“Mary Berry Cooks”
Overall Grade (A- F):  Anna: “It’s a C, I”m afraid.” Maureen: C “Yes. Average at best.”
Best recipes:  Anna: Beef stew and the double chocolate chip cookies. Maureen: Chocolate tart, by a mile.
Grade for Photography (A-F): “There’s a lot of pictures of Mary, not so much of the food.” C.
Any disasters? Anna: Shepherd’s Pie. Maureen: Garden vegetable casserole.
Bookshelf or Charity Shop Donation?  Anna: I’m going to give it to my mother-in-law. Maureen: I’m going to mail it to my mother, I think she’d appreciate it more than me.

Tim: Mary Berry is hardly reinventing the wheel here, is she?

Maureen: No, but who doesn’t love a chocolate tart?

Maureen: It is indeed, just like Mary told me to do. She did want me to stencil some icing sugar on the top, but I chose not to do that. I don’t think it needs it, though if I were trying to impress dinner guests, I would do it.

Maureen: Seriously? Isn’t a homemade chocolate tart enough for you?

Nicholas: It is for me. This is delicious.

Andrew: Wow. This is good.

Maureen: This is the only recipe from the book where we all like it.

Tim: She does know how to bake, that Mary Berry. Is there a soggy bottom?

Maureen: Absolutely not. Was it hard to get it out of the pan?

Tim: I used my superior skills to get it out without a problem.

Maureen: Ha! I think that was down to the non-stick tart pan. Should I make it again?

Maureen: Making this dish, I feel like we’re newlyweds again and it’s 1995.

Maureen: Absolutely. The combination of the parma ham, the boursin cheese and the double cream all lend itself to a “Hey! We don’t care about our health at all!”

Tim: It is good, though.

Maureen: How can that be? It’s all things that you love.

Nicholas: Nope. I’m not feeling it.

Maureen: It’s been a long time since I used three different types of dairy in one dish, too. That’s something.

Tim: It’s good, but I’m not sure I would want to have it again.

Maureen: I know what you mean. It reminds me a great deal of my mom’s dinner party mainstay of the 1980s– chicken breasts with ham and swiss cheese in the middle, cooked in a sauce equal parts Campbell’s cream of mushroom soup and white wine. Ah. That brings me back.

Tim: Would you want to have it again?

Maureen: I really don’t know. On the one hand, I think tastes really good, but on the other hand, I know it’s not the best thing for my health to eat. It’s a bit of a toss up.

Anna: Oooh these are very good. I like these.

Nina: They are lovely and soft. The outside of some cookies get a bit hard but these are soft all over. Yum!

Anna: These are better than Rachel Allen’s recipe. Those are chewy but are very thin and flat. These are lovely and cakey. Mary says the secret is self-raising flour. Whatever it is, it’s worked. 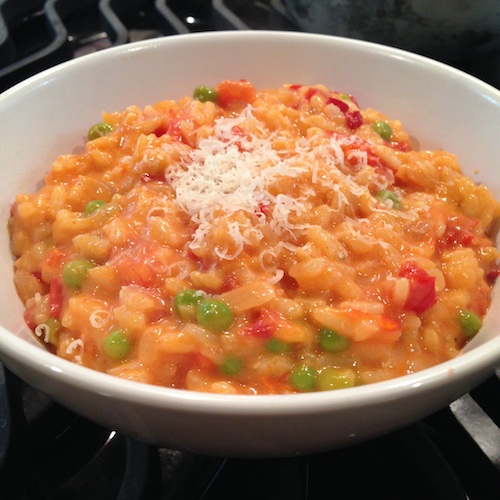 Maureen: Everybody’s favourite: Risotto! What do you think?

Andrew (14): I think the tomato is overpowering, and it takes away from the risotto taste.

Nicholas: I agree. It’s like there’s two tastes that both want attention, and neither is winning.

Tim: I think it’s like a party in my mouth where I don’t know too many people.

Andrew: So it’s sort of awkward.

Nicholas: It sounds like a bad party to me.

Tim: Also, the creamy goodness of a typical risotto doesn’t come through.

Maureen: That’s because there’s no parmesan and butter to finish it off, like I usually do. Mary uses creme fraiche instead, which I think is a bit of a cheat.

Tim: Also, I think the tomatoes are too acidic and the peas don’t add anything.

Maureen: Yes. I am befuddled by the peas. Why add them at all if it’s called a triple tomato risotto? Also, it’s not just tomatoes that are in here, she also uses red peppers, not to mention the peas. I think calling it a garden vegetable risotto would be more accurate.

Tim: I think the peas were there to just add some contrast.

Maureen: So, not a winner then.

Andrew: No. Just make our usual risotto next time.

Louis: Mummy has beef stew, Daddy and Louis have beef stew… what is Isabella eating?

Anna: Beef stew, all whizzed up! I think the porcini mushrooms are a bit lost….

Anna: Here, have some of mine.

Peter: Isabella can’t get enough of this.

Anna: It’s the first time she’s had beef and she’s clearly loving it. Must have been all those burgers I ate while I was pregnant.

Peter: I think I can guess who is going to get the leftovers.

Kirstin: What do we think of this, peeps?

Ella: But it’s not as yummy as the usual burger recipe.

Tom: Indeed. It’s not that special.

Kirstin: So our other recipe is still the winner. Interesting! I shall have to make it again soon in that case.

“Pork and Red Pepper Burgers” from “Mary Berry Cooks”
A cookbook a month
Blog at WordPress.com.