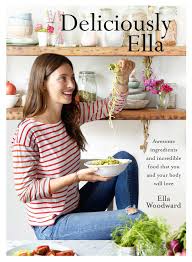 Maureen: Well, this was a disaster.

Kirstin: I’ve given my copy away already, and that was before the end of the month. That has to be a first.

Maureen: I had low expectations going in, and they were met. The problem was there was no added oomph to the recipes. Many of them could have benefitted from the addition of more herbs and spices. Also paging through, I was completely uninspired to try any of them, which is unusual for me.

Kirstin: The other thing I found is that I don’t mind going out to find funny ingredients, but every time I started to reading her recipes there was almond milk, or chia seeds, or whatever, and I didn’t think the effort would be worth it.

Maureen: Yes, may times I read a recipes with something I had never heard of and I thought, “Where am I going to find that?” and then I would turn the page.

Kirstin: I didn’t want to do the recipes enough to invest my time or energy in either finding the ingredients or making it.

Maureen: Thinking about some of the other vegetarian cookbooks we’ve done and enjoyed, like “A Modern Way to Eat” or Mary McCartney’s “Food” and you never felt like you were making sacrifices to make the recipes in there, but in this one, it felt like one big sacrifice, which is never good.

Maureen: A vegan friend of ours said it wasn’t fair of us to review a vegan cookbook if we’re not vegan ourselves, but it shouldn’t matter if we’re vegan or not. It should just make good food.

Kirstin: It should be all about the food.

Maureen: It’s amazing how well this book has sold, given how terrible it is.

“Deliciously Ella”
Overall Grade (A- F): F (from both of us)
Best recipes: Maureen: I didn’t mind the curry that I made, which would be good with a few adjustments. Kiristin: As I don’t even have the book anymore, I can’t remember if there were any.
Grade for Photography (A-F):  F: Fake polaroids and a cover photo where her top should have been white and red, but instead was grey in places because they turned down the highlights.
Any disasters? No disasters exactly, just the recipes weren’t very good at all.
Bookshelf or Charity Shop Donation? Charity shop donation, in fact, Kirstin has already sent her copy there. 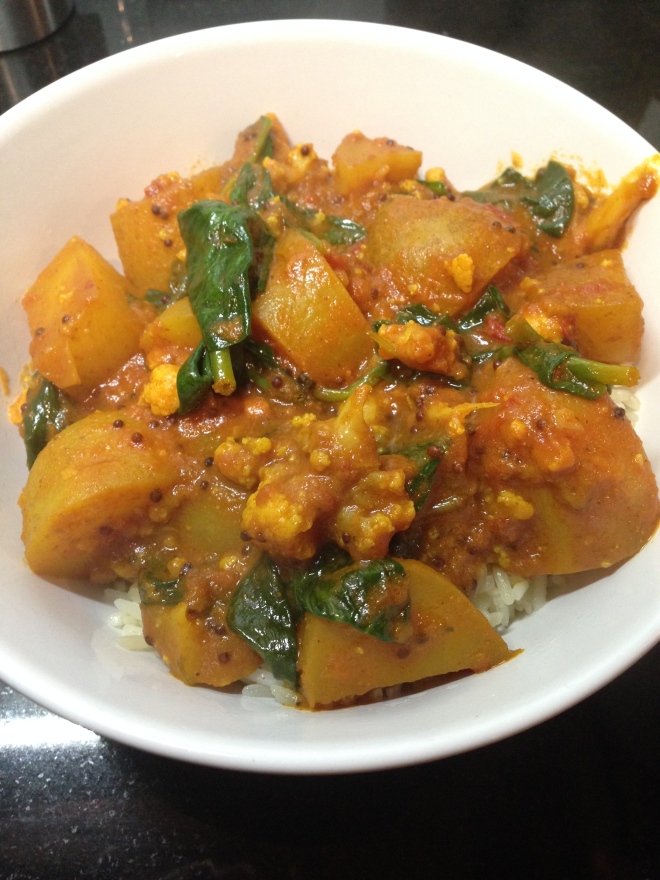 I won’t bury the lede here. We liked it!

I have to say I was surprised. I’m a bit dubious about this whole book, which is why I’m struggling to find recipes that I want to make. But as it was Meat Free Monday, I thought I would look again through the book hoping to find something that would work for last night’s dinner. And I did.

After making the Veggie Lasagna where herbs and spices were completely absent (and would have gone a long way to making that dish better), this dish went completely in the other direction, with a combined 12 tablespoons of spices, along with garlic and jalapeno peppers. Lest you worry that’s a lot of flavouring, it all gets absorbed in the chopped tomatoes and coconut milk in which the vegetables cook.

Our only criticism of this dish was there were too many potatoes. We all felt it was mostly a potato dish, with the other ingredients fighting for attention. The next time I make it, I’ll only use about 750g of them (or 12 charlotte potatoes), but I’ll also double the amount of cauliflower I use.

Also it has to be said for the less experienced cook that the instructions are a bit vague at times. What exactly does a “generous amount of olive oil” mean? I guessed, but I’m still not sure I had it right, and you could quite easily use too much olive oil and then end up with a greasy curry.

We enjoyed it. It scored an average 7/10 – Would Eat Again from the table. I’m including the recipe below for those who would like to make it.

A few notes from my experience:

-As I said above, I would cut down on the number of potatoes, though that comes down to personal preference. I would also double the amount of cauliflower.

-I threw caution to the wind and cut the potatoes down into chunks before I par-boiled them. It saved me time in the long run, as I didn’t have to wait for them to be cool enough to handle and I could just get on with the next step right away. They held up fine.

-We all put some Greek yogurt on top to lessen the sting of all the spaces.

-Before you start, check the supply levels on the spices that it calls for. Three tablespoons takes about half of a standard-sized spice jar.

-Ella recommends that you have it with brown rice. We were rebels and we had white rice instead. We like to live life on the edge.

END_OF_DOCUMENT_TOKEN_TO_BE_REPLACED 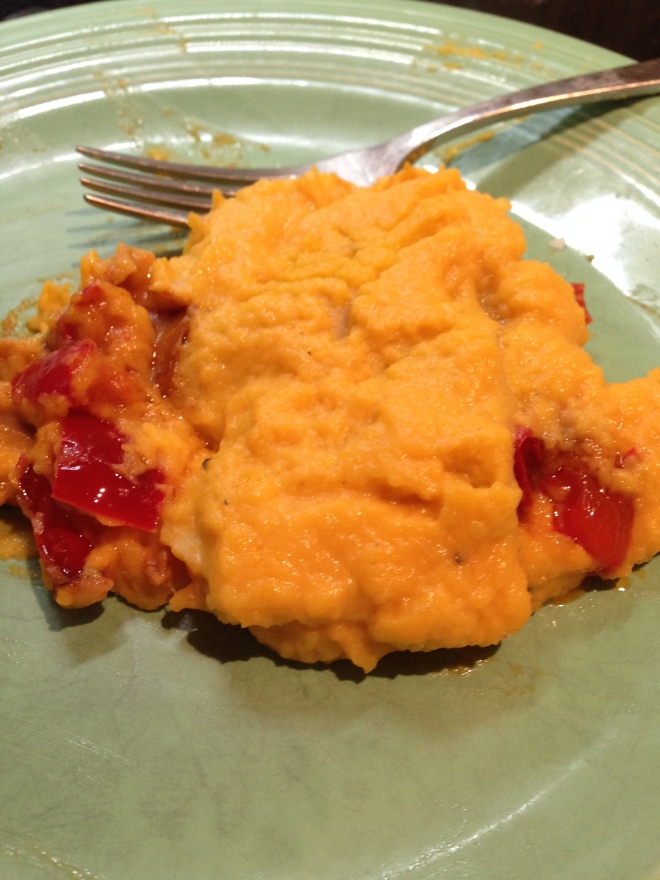 Given that I faced universal resistance from my family for a month of eating Ella’s way (no sugar, gluten or dairy, which frankly are all the fun food groups), I decided to make a single serving of the Veggie Lasagna.

This was a good decision. I didn’t help the cause by making a vegetable lasagna that full of cheese (ricotta and mozzarella) goodness and other roasted vegetables for the rest of the family, so they really weren’t tempted to try this version at all.

“This is delicious!” the boys kept saying about their own, cheese-laden lasagna. “It doesn’t matter,” I would reply. “It’s not going on the blog.”

So I soldiered on with what I was calling my Unfun Lasagna. To be fair, it wasn’t terrible. It just wasn’t full of the cheese goodness I’ve grown to know and love in my usual lasagna. Ella’s lasagna never stood a chance.

Curious about he Unfun Lasagna my husband Tim did take the second piece to give it a try. He said while it was good, he wouldn’t go out of his way to eat it or ask for it again.

I feel the same way. I could see how a vegan would like this, but as I’m not vegan I can continue with my cheese loving ways with our usual vegetable lasagna. 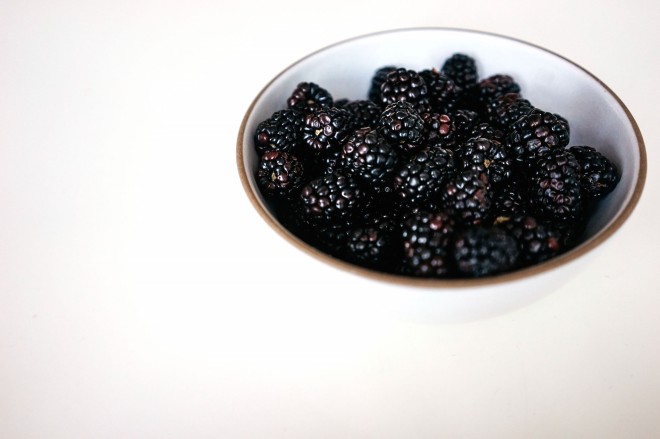 Ella: It’s a bit weird to be eating such an autumnal dessert in March.

Ella: I like the strawberry crumble more. Will you make it for my birthday again please? But this crumble is very nice. And the colours are nice too.

Kirstin: What do you think of the topping? Can you taste the coconut?

Tom: What’s it instead of?

Kirstin: Usually yummier things, like butter. And we’ve got loads left over.

Tom: Have it for breakfast.

Kirstin: Funny you should say that, because that’s just what Deliciously Ella suggests.

Ella: That’s just what I did last summer. I had crumble for breakfast when we had leftovers. Do you think there will be any left on Monday?

Tom: You know when Ella is grown up, she’s going to write a book like this. It’s going to be called Sarcastically Ella. Or maybe Maliciously Ella. 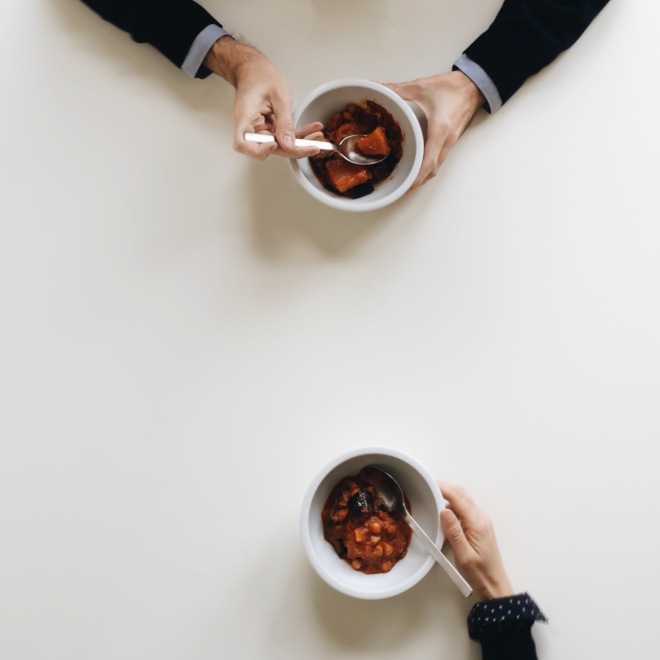 Tom: Is this a vegetarian curry?

Ella: It’s like a curry without all the good bits.

Kirstin: You haven’t even tried it yet, Ella!

Tom: This is really tasty.

Ella: Well it’s still not going to taste like pork, is it?

Miles: Where is the meat?

Kirstin: Why don’t you try it?

Ella: *sigh*. Or should I just curry on complaining?

Miles: I tried it and I didn’t like it.

Kirstin: Well I do! I love the way it just sits in the oven for a good long while, brewing the flavours.

Kirstin: So we keep seeing this book everywhere, right?

Kirstin: Some of the ingredients look a tad on trend.

Maureen: I know we’re going to be eating healthy, and that’s good for us and everything, but I also despair a little bit of another month of no gluten, dairy, sugar or other yummy ingredients. Let’s see how the month pans out.

Kirstin: We shall see!

Cookbook of the month, March 2015, Deliciously Ella: Awesome ingredients, incredible food that you and your body will love