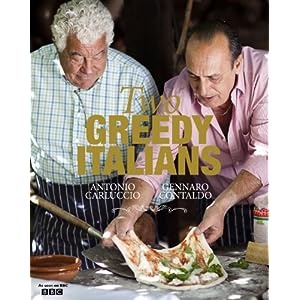 Maureen: I loved this book, actually. We ate very well, nearly all the time. There was only one bum recipe.

Kirstin: And which was that one?

Maureen: Housewive’s chicken. First I had a problem with the name of it. And then it just wasn’t very exciting. It was easy, but it was just fine.

Kirstin: I have to say I wasn’t blown away by any of these recipes. But maybe I chose the wrong ones. I suppose I chose recipes I’ve cooked from other books, so it’s always difficult to directly compare. And of course I’ve grown up with the River Cafe books, so they are the books I turn to when I need to make an Italian recipe. I will make the bolognase again, but I think mainly because the little people liked it.

Maureen: I loved the vegetables I made over the weekend. It was so funny because Nicholas didn’t  like the green beans which we all loved.

Kirstin: See? I should have made some of those vegetable recipes. I knew it! What else did you enjoy making?

Maureen: I enjoyed the panzanella…it had all sorts of vegetables in it and not just tomatoes.

Kirstin: Oh, that’s an interesting take on the traditional panzanella recipe. There were several recipes I didn’t get around to this month. I meant to make pasta, for instance, but never got around to it.

Maureen: And I would have liked to have made something from the fish chapter. And I loved the mad pasta in egg thing.

Kirstin: You mean frittata with leftovers. Oh yes! We love frittatas. What about the dessert recipes? I wasn’t particularly inspired by them, I have to say.

Maureen: To be fair, we followed this on from Hummingbird so it was always going to be a tough act to follow.

Kirstin: Too true.  I will be making that  lemon granita when I have a moment this Summer. Ella loves all things cold and lemon.

Maureen: I’m going to make the panettone and ricotta pudding.

Kirstin: So do you think this is a keeper on the shelf. It’s always a good sign when we still have recipes we want to make.

Maureen: Yes! I think it’s going to go on my high rotation shelf.

Kirstin: I don’t think I would go that far. I think it would make it onto the back room cookbooks shelf,  but it wouldn’t at least make the charity pile, which is what I did with Nigel’s book, half way through that month!  Poor Nigel.

“The Two Greedy Italians” – our verdict

I really hate the name of this recipe in English, but I’ll translate it for you anyway because I want to be a Full Service Blogger to you. The name of it in English is “Housewives’ Chicken in White Wine and Vinegar.” See? I told you. Housewives chicken. What year is it? 1954??

Apologies to the readers, but I have no dialogue for this recipe. However, given how boring the dish is, I don’t think anyone would have anything interesting to say. I could easily see the conversation quickly heading into “Who will replace Carlo Ancelotti terrority?” with concern from the Chelsea fan and bitter recriminations from the Arsenal fan at the table. But I digress.

I hate to say it, but this is the first bum recipe from the book. The rest have all been very good. This doesn’t taste bad, it’s just terminally boring. It could easily be classified as, “Food to fill me up but isn’t memorable.” Maybe it could have been improved by adding some hearty herbs to it, like rosemary or thyme.

Basically, all you have to do is get 1.2 kilos of chicken pieces, and add white wine, shallots, carrots, celery, lemon slices and some other bits to a casserole and let it cook for about 50 minutes. Honestly, it could not be easier. From the standpoint of effort, it’s a winner, but that’s the only good thing I could say about it.

((I think even the picture is a bit boring.)) END_OF_DOCUMENT_TOKEN_TO_BE_REPLACED

Maureen: I can’t believe we’re not at the state dinner with the Obamas at Buckingham Palace. Instead we’re eating this.

Maureen: You’d think they would select some good Americans living in London– like us!– to attend. Instead, who makes the cut? Tom Hanks and his wife Rita Wilson. How is that fair? So we’re not having Windsor lamb with basil. We’re having panzanella with a difference. What do you think?

Maureen: Really? I’m surprised. Do you remember the last time I made panzanella? It was a Jamie Oliver recipe, out of his Italy book, and he said it would be a quick and easy dinner. Instead we ended up eating in the dark on the patio at 11 p.m. Not a triumph.

END_OF_DOCUMENT_TOKEN_TO_BE_REPLACED

For those of you without an Italian-English Dictionary to hand, we had “Green Beans and Company” (or Green Beans, Buttered Breadcrumbs and Pine Nuts) and Sliced Roasted Potatoes with Tomato, Oregano and Basil.

We ate these with Veal Chops with Lemon and Capers that was in Saturday’s Guardian. (As luck would have it, I bought the veal chops BEFORE I knew the newspaper had a recipe I could use.) The veal was delicious and everyone loved it, even the boys.

Nicholas (8), pointing to the green beans: What’s this yellow stuff?

Maureen: What? The breadcrumbs fried in obscene amounts of butter with pine nuts? That “yellow stuff”?

Maureen: I totally agree. I think this is absolutely delicious.

Tim: I think what you mean is because they’re coated in breadcrumbs and butter.

END_OF_DOCUMENT_TOKEN_TO_BE_REPLACED

Tom: So you made this pasta yourself then, with white wine?

Kirstin: Yup….oh no, sorry. I had to do a million other things today. So that promise of making you pasta is on hold again. But I will do it. Honest.

Tom: Oh don’t worry about it. Making your own pasta is over-rated. We did it when we were young.

Kirstin: But now we have a special thing for the Kitchen Aid to make it easier. So I really do want to do it. I just need a time machine to add more hours to the day.

Tom: Good point. We really should try it again. Anyway, this sauce was good!

END_OF_DOCUMENT_TOKEN_TO_BE_REPLACED

How’s your Italian coming along, having read this blog this month? I made– but maybe you’ve deduced this already– Pasta with Lemon and Basil.

Maureen: So this is spaghetti with lemon, basil and tomatoes. What do you think?

Andrew (11): The lemon masks the taste of the other things, I think.

Maureen: It’s possible I did the lemon all wrong. The recipe said to take an unwaxed lemon “cut into small segments,” which I took to mean to slice it into sections as thinly as possible, including the skin. But now that I’m thinking about it, it probably meant to cut off all of the skin and then slice the remaining lemon up, like Nigella does for her green beans, which I make all the time. Sorry about that. You don’t have to eat the lemon slices.

END_OF_DOCUMENT_TOKEN_TO_BE_REPLACED

Or, for those of you loathe to take out your Italian-English dictionary, Leftover Pasta Omelette and Garlic Soup. (Frankly it sounds better in Italian.)

Maureen: Tonight is the night we’ve been waiting for: the night where I try to recreate the truly magical dish of a spaghetti omelette, like we had at Bocca di Lupo.

Maureen: (Bringing it to the table) This has got to be one the craziest things I’ve made recently. But I can’t wait to try it. I can’t believe it actually worked!

Nicholas (Now 8! Happy Birthday to him): This is SO delicious.

END_OF_DOCUMENT_TOKEN_TO_BE_REPLACED

Kirstin: Exactly my feelings too. It was super easy to make. I prepared all the vegetables beforehand and then tossed with the pasta. I like the crunchiness of the pepper with the pasta.

Tom: There’s raw garlic in this too, right?

Tom: Well, I can see us eating this on Summer evenings in Italy.

Kirstin: Too right. I keep finding capers in the tomatoes. I don’t even like capers, but with tomatoes they taste just great.

Tom: Yes, I don’t normally like capers either. But they add salt in this recipe.

Kirstin: So I’ll be making this one again then. Salad and pasta in one bowl.

For those of you who still haven’t gotten to the food section of Rosetta Stone: Italian, this is known in English as Lamb with Fresh Peas. You could also probably call it just Lamb Stew.

Andrew (11): I’m oing to judge this dish based on the acronym OPEN: Organisation, Presentation, Enjoyment and Nutrition. Here are your scores.

For Organisation: I will give it full marks. Five out of five. It looks very well organised.

For Presentation, I’d give it maybe three out of five. I’m going to be brutally honest, it looks like you took it out of the pot and put it in a bowl.

Maureen: Well, that’s exactly what I did, so I’m not at all surprised it didn’t score well.

Tim: Yes, it’s a stew. That’s what you do with a stew. But I can’t believe that your mother made a stew. As we all know, she hates stew.

Maureen: I really like this one, though. It’s delicious. I’m still not sold on beef stew or any variations thereof, like beef bourguignon, but I would happily have this again.

END_OF_DOCUMENT_TOKEN_TO_BE_REPLACED

Kirstin: So we should be talking about this now…

Tom: That was rather good. I liked the chilli.

Kirstin: Having just wolfed down my bowl, I feel now really full. But in a good way.

Tom: Yes, that kind of pasta is surprisingly filling.

Kirstin: Do you remember that amazing green olive oil straight from the press?

Tom: Yes, it was so sharp. It was like it had chilli in it.

Kirstin: Anyway, I would definitely make this again. But maybe not in the summer as it was a little filling.

Tom: Yes, it is quite a substantial meal. I could easily imagine adding pancetta and parmesan to that too.

Kirstin: I could have a nap now after all that pasta!