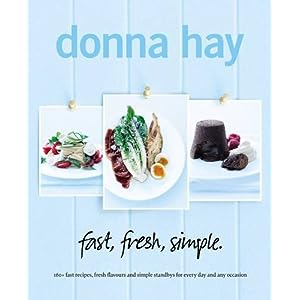 Maureen: The problem with Donna is that (sigh) her recipes don’t show any love or affection for food.

Kirstin: That’s exactly it. You nailed. The pictures are gorgeous though and that’s what dragged me in. I think she’s more into the looks of food than the eating and enjoying.

Maureen: And the timings were wrong. I’m convinced she wanted to kill somebody.

Kirstin: I will not be cooking from this again. Although I will look at the pages for inspiration on great food photography.

Maureen: The other thing is that it felt really dated to me. There was lots of pasta and sun dried tomatoes which felt very 1990s to me.

Kirstin: That might be the whole Australian food thing though. I don’t know. I haven’t been there…it’s on the list of places to go.

Maureen: This is my second try with this dish, since it didn’t work at all the first time around, since again there was a problem with the cooking times for the chicken. What do you think?

Tim: I’m not a huge fan of sweet dinners.

Maureen: Yes, it’s the honey the makes it so sweet.

Tim: Very much so. What do you think of it?

Maureen: It’s fine, but there’s nothing special about it. This is the problem with all the recipes in this book. There’s no care or attention paid to the ingredients. Just assemble them and bang them in the oven. It’s assembly, not cooking. Would you like me to make it again?

Tim: This month hasn’t been very good, has it?

Maureen: Sadly, no. Donna’s been a big disappointment.

“Chicken with Halloumi and Honey” from “Fast, Fresh, Simple”

Anna: Oh dear. This didn’t work, on so many levels.

Peter: I sense you didn’t like this as much as I did. The portions were certainly… generous.

Anna: Is that why you liked it?

Peter: No! It’s a shame we are having a heatwave as it was quite autumnal.  Also, I think it’s probably a good store cupboard meal.

Anna: I don’t know. How often do we have goats curd in the cupboard?

Peter: We didn’t use goats curd, we used goat cheese. I accept we wouldn’t buy that every week, but everything else we’d have.

Anna: But didn’t you think it was dry?

Anna: It was a big lump of stuff in a bowl.

Peter: Wasn’t that to do with the pasta?

Anna: Partly. But also because the timings for caramalising the onions were totally off.  You can’t caramalise 4 onions in 10 minutes!  We gave them another 5-7 and they still weren’t caramalised but at least they were better than before. But what that meant was that the liquid had cooked off, and the pasta was cooked, so in the end everything was dry and lumpy.

Peter: Well maybe you need to treat the recipe a bit differently. But I’m not given the latitude to do that.

Tom: This was rather good. The skin was crispier than usual, and the meat was more fragrant, though it was also a bit dry. How did this recipe differ from the usual Simon Hopkinson classic one?

Kirstin: Well, I cheated. It was supposed to be two small chickens, like poussins, serving two people. And we had one big chicken serving four and had to cook it for longer. So that’s probably why it was a little dry. She also did not put any salt on the chicken, which is criminal. So I stuck some on anyway. There was no butter, just olive oil. What do you think of this pork, Miles?

Miles: Is this pork? No, it’s chicken!

Kirstin: Just kidding, Miles. What is a Darth Vader minifigure doing on the table?

Miles: Oh, I left him there.

Tom: There’s a Death Eater minifigure lurking in the living room, too.

Kirstin: You never know when you might need a Death Eater. The united forces of evil!

Tom: There was no gravy with this recipe because it was cooked on greaseproof paper, and there was no butter. So there was less fluid. And I couldn’t deglaze the pan because of the paper.

Kirstin: But it was much easier to wash up afterwards. Don’t forget! Would I cook this again? No.

Tom: But I wonder if there’s a happy medium between this and Simon Hopkinson. Little or no butter, lemon slices, and so forth.

Kirstin: No. One is healthy — this one — and the other is not.

Anna: Chef-husband, what did you think about this recipe then?

Peter: The paste was relatively easy to make.  But you thought the chicken needed more time.

Anna: Yes. Only because she called for chicken thighs, cut in half, which are quite big pieces. And they weren’t properly browned before you added the coconut milk.

Peter: I was just following the recipe.

Anna: I know you were. That’s all that’s been asked of you too! But it did mean that I felt we needed to keep them cooking in the sauce for longer than the stated 10 minutes total, just to make sure they were properly cooked.

Peter: The whole recipe was very quick and if the timings had been correct it would have been extremely easy to do.  We used six thighs based on the weight guidelines she gives. She called for four, so there must be some extremely large chickens in Australia…..

Anna: I really liked this, as a quick and fresh alternative to a Thai green curry. The flavours were delicious, and I’m a big fan of spinach which is added at the last minute.  The fact that you found it easy to cook means I love recipe this even more. I can forgive her the timings for the chicken as most cooks would be able to work around that easily.

Peter: I’d be happy to cook it, and eat it, again.

Kirstin: What did we all think about this?

Ella: I loved it!

Miles: It was delicious.

Georgia: It was so epic.

Tom: The rice wasn’t cooked properly, was it? Apart from that it was nice.

Kirstin: I thought the chicken was too dry. So dry I’m not sure I’d cook it again. Plus there weren’t enough flavours for me. It’s always so enticing to find a good one pot meal. It’s like the search for the Holy Grail!

Tom: It was a bit bland, that’s true.

Kirstin: Which was good because the kids ate it, but I like more flavours.

Sorry, I don’t have any dialogue for you today as I made this for my lunch and I tend to eat alone. Not for any Greta Garbo sort of way, but just because that’s where I found myself that day. In fact, she never said, “I want to be alone” and instead said, “I want to be left alone.” Garbo later said, “There is all the difference.” Indeed.

But I digress. I can tell you that I enjoyed this dish so much that I have now eaten it for lunch twice. It is a whole lot of good eating in one little skillet. For the record, I never added the sage leaves it called for– I had them, I just kept fogetting to add them– but I don’t think that oversight left the dish wanting. Also, I didn’t have any single cream to hand, so I used milk, which also worked. I imagine the cream would make it an even richer dish, but it seems pretty good as it is, so I don’t know if its use is entirely necessary.

I didn’t think it would work to cook the spinach with the chorizo, as I usually cook down spinach with water. It did work, though, and it worked a treat. I will remember this trick when I make other dishes with spinach in the future.

Again, because I was eating alone, I cut the quantities down to make it for one person. It could very easily be scaled up, in which case you’d need to share the whole skillet of goodness, which might be difficult for some people.

I would definitely make this again, especially for a weekend breakfast or brunch, though lunch on my own was equally nice. I’m pleased to say that all the timings worked for this recipe.

Andrew (12): I’m not sure about this. It’s too sweet and too spicy at the same time. Not a great combination.

Nicholas (8): I agree. What would happen if you combined sweet and sour at the same time?

Maureen: You’d get sweet and sour chicken from a Chinese restaurant. Yum.

Tim: Or sweet and sour pork from the same place. Yum. But this is not either of those things. What do you think?

Maureen: It’s not setting my world on fire. It’s fine, but it’s nothing to write about. (Editor’s Note: And yet, here I am…) What do you think?

END_OF_DOCUMENT_TOKEN_TO_BE_REPLACED

Anna: There’s something very calming about listening to two hours of Simon on Classic FM while blogging.

Peter: Yes, I’m learning all sorts of things I never knew, though you keep correcting the DJ so clearly you know more.

Anna: I only corrected one thing, she got the name of the Academy of Ancient Music wrong.  I spent much of my misplaced childhood at AAM concerts so I should know.  Anyway, the food. How did you find cooking this tonight my lovely chef-husband?

Peter: I think it benefits from having everything out and ready before you start as the whole process is very quick.

Anna: Did our Donna suggest you do this, or is it something you decided to do?

Peter: I brought that tip to this recipe.  It was very quick and I found it hard to know when the polenta was cooked but that’s because I’ve never made polenta before.

Anna: You’ll know for next time…..

Peter: This was double cheese polenta, posh cheesy mash.  The veal was good with the prosciutto. And I think they complemented each other well.  Go easy on the portions though, if you don’t have a big appetite.

Anna: I really liked this. I need double cheesy food at the moment and it hit the jackpot. We had it with spinach to add a veg component, and I think this would make a lovely meal for a weeknight dinner party.  The veal was a bit pricey, but you could substitute it for turkey escalopes if you wanted to.

Peter: Or pork chops! On a practical note, this dish only uses two pans which is good. And the recipe is easy to follow.  But I found it off-putting that there were 4 recipes on each page, and the photo was on a different one. That’s just my opinion.

Ella: I could eat this every day. Forever.

Ella: He always likes the rice.

Miles: This chicken is a bit coughy. But it’s a bit delicious.

Kirstin: That might be the small amount of chilli…

Kirstin: This is much yummier than it smelt as I was cooking it up. Vinegar never smells good when it’s being boiled. But it was totally worth it and extremely easy to cook.

Miles: I’m going to have some more rice!

Kirstin: Should I cook this again?

Miles: No! Thank you.