Anna: Chocolate chip cookies.  I learnt to cook them standing on a chair next to my mother as a child.  So, as you know, I only ever make the same recipe using Toll House chocolate chips.  The recipe is on the back of the packet.

Peter: That’s why we have to smuggle bags of them back into the country every year when we go to visit your dad.

Anna: Indeed.  But, you need something sweet to take to work and I was in the mood to try this recipe.  It gave me the excuse to use up all the leftover bits of chocolate I’ve got in the cupboard.

Peter: All the chocolate’s gone?!  What chocalate have you used?

Anna: Just the dark and white cooking chocolate from the deserts I’ve made over the last month.  Panic not.  Your Dairy Milk megabar has not been touched.

Peter: Normally you see the chips in the cookies.  With these you don’t necessarily know what you’re going to get with each bite.  I like that.

Anna: I had to chop them up so some melted into big pools of loveliness didn’t they?

Peter: I liked these.  They aren’t too brittle but have a nice soft texture.  They would taste good with ice cream.

Anna: Mmm.  Ice cream sandwiches!!  Yes, I agree.  These are lovely.  And, in some ways easier to cook.  I don’t have to work out what a cup of butter is, for example.  I will definitely be making these again.  Perhaps my chip-smuggling days are over….

Peter: Does that mean there’s more room in the bag for bike bits?

Ella: Those biscuits were amazing! I really liked the chocolate-y bits. And they were nice and crunchy. 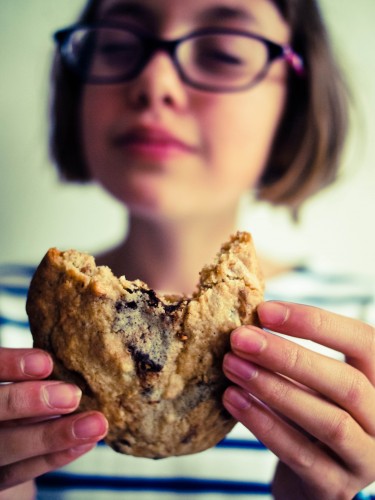 Anna: I’m getting quite good at these birthday feasts given it’s the month of August. Because you are my co-conspirator and blogging partner-in-crime, this is a particularly special one.   Thankfully Zoe was able to run to Marks’ in her 3 inch peeptoe heels, on an emergency lemon mission, so now we are able to drink White Ladies all night!

Zoe: I only got one blister!  (Cackle)

Kirstin: I’m going to miss the cocktails.  I think we should do them anyway after this month. 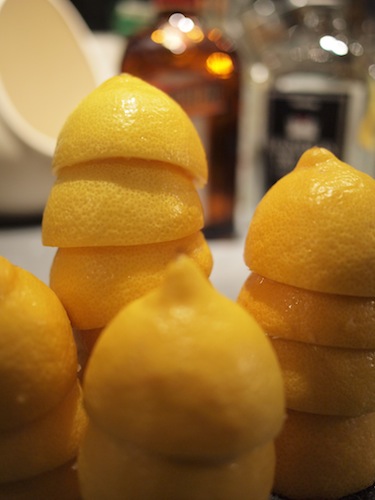 Anna: Shall I email Bill and ask him to write a cocktail book?

Zoe: Wasn’t the idea to drink less if we had cocktails? But instead we downed the first one.

Anna: White Ladies were chosen in honour of us and our purity.  Eh Zoe?

Anna: I chose this menu for you Natalie.  It’s your birthday week, and everyone deserves a nice curry on their birthday.  Will you be blogging tonight in the manner of Gregg Wallace?

Nats: If I was critiquing in the Gregg Wallace-manner, I’d call it a ‘tender, buttery, smack-in-the-chops of flavour’.

Anna: Can you translate for us? 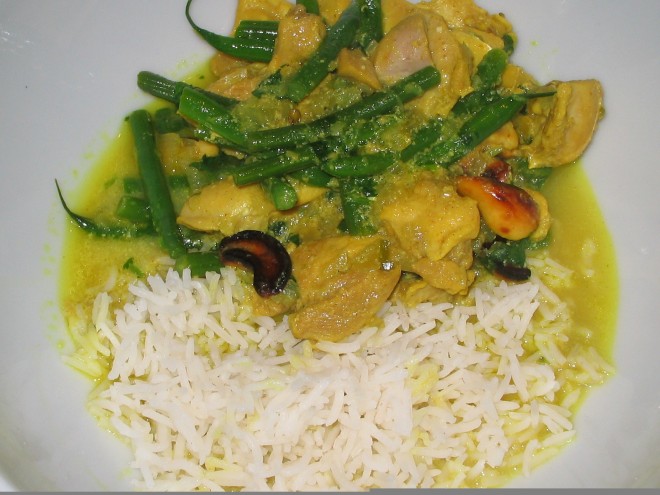 Nats: That was me trying to be Southern! I was particularly impressed with how well the rice was cooked, and that wasn’t even in the recipe.

Nats: I think the curry was milder than I’d expect from you.  But absolutely delish.

Peter: It had an interesting texture due to the addition of nuts.

Nats: Did you feel they contrasted particularly well with the beans, which were a bridge between the chicken and the nuts?

Peter: I’m with you.  I can see where you’re going with that one.  Good point.  Well observed.

Nats: I’d always associate Anna with cooking something that punches you round the mouth.

Peter: No, it wasn’t a chicken Nazi.

Anna: You make me sick.  The pair of you.

Anna: I have to admit that I had to improvise a bit with the ground almonds, discovering as I did at the eleventh hour that I had none.  So I whizzed up some blanched almonds in the food processor instead. This means it probably has a crunchier texture than it’s meant to.

Nats: I would say that’s a good thing.  Because it was quite a simple cake. I’m saying that, but how many cakes do I make?

Anna: Do you mean rustic?

Nats: I don’t know… do I?  Maybe because it was flourless, it needed a bit of texture.  It was very moist.

Anna: I don’t like the word moist.  You know that.

Nats: It’s so descriptive though.  It means exactly what it says on the cake tin.  Anything with almonds is a winner with me.  I particularly liked the addition of the fruit.  Even though I don’t normally like mango.  I’m with Kirstin on that.

Anna: Did you get the white chocolate?

Anna; I did.  But I knew what I was tasting as I licked the spatula when I was cooking it.