Peter: Well this has a bit of tickle.

Anna: Pretty spicy for sure. This is great.

Peter: You can make this again.

Anna: Why thank you. I definitely plan to. It would have been quick too, had I not had that purge of the spice cupboard at Christmas. Thank you for the emergency dash to the Coop for tumeric, by the way.

Peter: So are we thinking this is Thai?

Anna: I would say so. Coconut milk, lemongrass, chilli, lime, fish sauce… seems pretty Thai to me. It would be good with leftover roast chicken too.

Peter: So when are we having this again?

“Spiced Chicken and Noodle Soup” from “A Year of Good Eating” 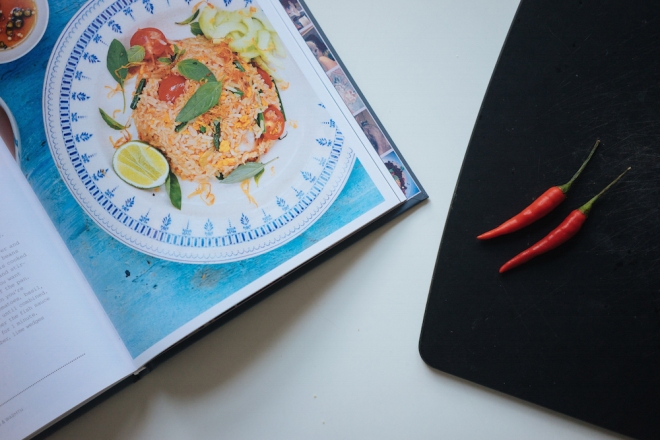 Kirstin: Oooo. This is super tasty!

Miles: The chicken is very yum!

Kirstin: What do you think, Ella?

Kirstin: That’s it? No buts?

Kirstin: Really, Ella? Oh but this is so good. Just the right amount of chilli. And so many lovely flavours. Shall I make this again?

Anna: What do you think of the soup?

Jane: I like it very much. How did you do the tomatoes? I have a tomato soup recipe that you roast the tomatoes for and then wizz them up. 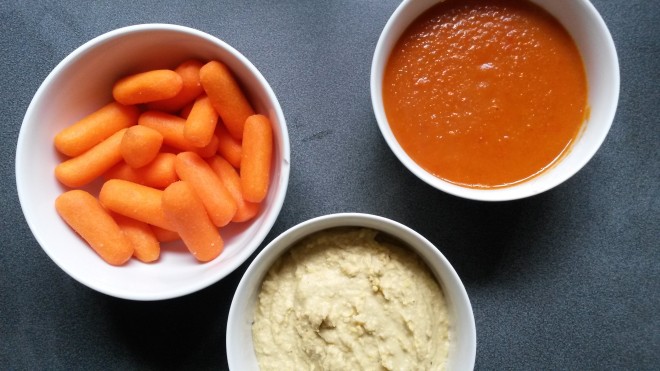 Anna: This uses a tin of tomatoes, and coconut milk and various other things. I think it’s worked well. I’m pleased.

Jane: This hummus is pretty tasty too.

Anna: This was even easier that the soup. I always think I should make my own hummus and this proves that I should. What a nice lunch.

Tom: Well this was just what I needed for my cold.

Kirstin: I gave you most of the chillies to help with that too!

Kirstin: They’re just noodles. How can you not like them?

Ella: I just don’t like the consistency of them.

Kirstin: I cheated and whizzed up a lot of the ingredients rather than chopping them finely as she suggests. Yes, I would definitely make this again.

Anna: What do you think of this?

Anna: I think it should be more moist. And that’s my fault because I got you to do the rice slightly ahead of time. It dried up while it sat waiting for me to get out of the shower.

Peter: I don’t mind too much.

Anna: It’s quite nice at first. The way the rice is cooked with the red curry paste works. But I think the mouthfuls get a bit boring after a while. Which is no bad thing as it means I’m not going to eat as much.

Peter: The edamame beans don’t help. They are a bit worthy.

Anna: They are very good for you though. Would you eat this again?

Peter: Yes, although it might benefit from the addition of some meat!

Kirstin: Oh my goodness, just whizzing up these ingredients made me happy!

Tom: It smelt lovely as I walked into the house too. 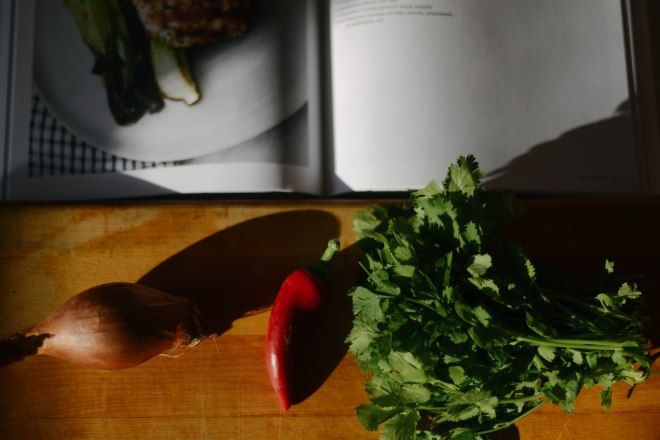 Miles: (thumbs up with mouth chewing).

Ella: What’s this green stuff in the burger?

Kirstin: And I used turkey and not chicken as it’s easier to get hold of.

Miles: I love it!

Tom: And it would appear Oscar (our cat) also likes the smell of it, judging by his howling.

Kirstin: I think these could become a high rotation recipe, so you’ll have to start liking the taste of coriander, Ella!

Peter: What is this that we’re eating?

Anna: Thai yellow curry. I made the paste from scratch.

Peter: Good curry paste. Is there any leftover?

Anna: Yes, it’s in the fridge.

Peter: We should freeze it.

Anna: Bill doesn’t say whether that’s possible in the recipe but we may as well try. It’s just going to go off in the fridge otherwise.

Peter: I like fish curry and this is nice. Not too soupy. Probably could have been hotter, but that’s just me. I’m sure you can change the paste for next time.

Anna: It was pretty easy to make but this recipe would have been super quick with shop-bought paste. I may just do that short-cut in future so I don’t have to fuss with washing up the food processor, or getting it out of the back of the cupboard for that matter. What did you think of the coconut rice?

Peter: I didn’t notice. I thought the sauce had the coconut milk in it.

Anna: They both did. Coconut cream is a little too indulgent for me. If you didn’t even notice it then there’s no reason not to do normal rice next time!

Peter: Thai? This reminds me more of Vietnam. The fishy, cold dressing and cucumber.

Anna: Fishy doesn’t make it sound very appetising. I think the word ‘salty’ is better. But I know exactly what you mean. It’s the dressing. The proportions of fish sauce to lime and sugar just feel wrong. 90ml of fish sauce for two people? I don’t think so. I added more sugar but didn’t have anymore limes. It was fine, but I agree. More Vietnam than Thailand.

Peter: I did like it anyway. But as I’ve got a mouth ulcer it wasn’t the best meal to have.

Anna: That will be the limes.

Peter: I’m not sure beef is the best thing to go with this salad.  But it was nice.

Anna: I think it’s supposed to be like ‘Tiger Cry’, which I enjoy very much when we have it at Thai restaurants. What do  you think would have been better?

Peter: Maybe a firm fish. Like seabass or monkfish.

Anna: You are getting sidetracked by the overpowering fish sauce I think. If the dressing had been better balanced you would have found the beef very good with this salad. So, we probably won’t be doing this again. Unless I steal one of Bill’s Thai dressing recipes to go with it!

Anna: Chef-husband, what did you think about this recipe then?

Peter: The paste was relatively easy to make.  But you thought the chicken needed more time.

Anna: Yes. Only because she called for chicken thighs, cut in half, which are quite big pieces. And they weren’t properly browned before you added the coconut milk. 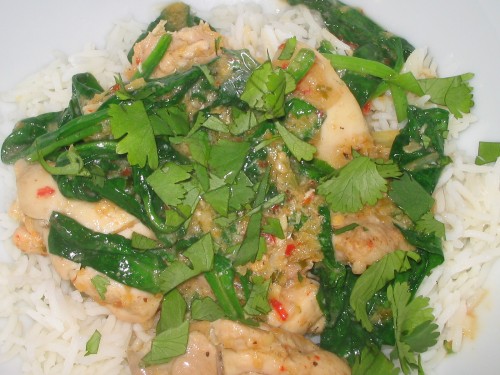 Peter: I was just following the recipe.

Anna: I know you were. That’s all that’s been asked of you too! But it did mean that I felt we needed to keep them cooking in the sauce for longer than the stated 10 minutes total, just to make sure they were properly cooked.

Peter: The whole recipe was very quick and if the timings had been correct it would have been extremely easy to do.  We used six thighs based on the weight guidelines she gives. She called for four, so there must be some extremely large chickens in Australia…..

Anna: I really liked this, as a quick and fresh alternative to a Thai green curry. The flavours were delicious, and I’m a big fan of spinach which is added at the last minute.  The fact that you found it easy to cook means I love recipe this even more. I can forgive her the timings for the chicken as most cooks would be able to work around that easily.

Peter: I’d be happy to cook it, and eat it, again.

Kirstin: So Tom, do you think they have bamboo shoots in Thailand then? Or is it just a Chinese thing?

Tom: Hmmm. I’m not really sure.

Kirstin: I get the feeling they’re more Chinese than Thai.

Tom: Maybe they grow throughout Asia?

First person: So, this Bordeaux wine, is it from France or Italy?

Second person: Germany, I think. Those countries are all the same now, with the euro currency, aren’t they?

First person: Ah, of course. Except Britain, which does not use the euro, so it is not allowed to make Bordeaux.

Second person: Also, in Britain they speak a different dialect of European, I believe.

Kirstin: No clue whatsoever. And thank you for procuring Thai aubergines for me today. The recipe helpfully said to cook until done, or something like that anyway. 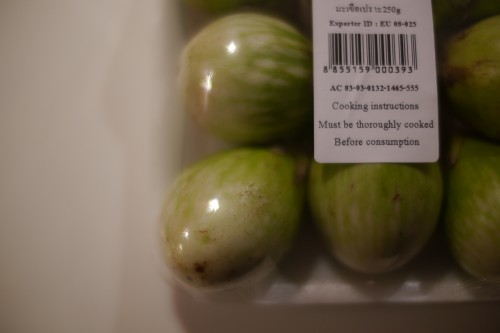 END_OF_DOCUMENT_TOKEN_TO_BE_REPLACED

“John’s Thai Curry” from “Leon 2”
A cookbook a month
Create a free website or blog at WordPress.com.