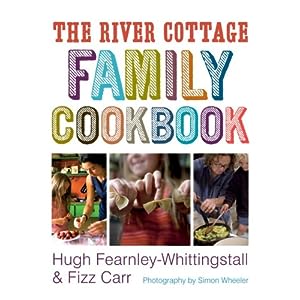 Maureen: Overall this cookbook has great family recipes but not enough of them.

Kirstin: We set a pretty difficult challenge each month for the cookbooks. But I would have to agree only because each recipe was so good I wanted more.

Maureen: I thought also this would be a good cookbook for a learner cook as there were pages to describe different types of food. I thought the recipes themselves were really well written and described.

Kirstin: I loved  his descriptions and the “how to eat…” at the end of each recipe.

Maureen: But a lot of the projects were a little silly. I will never make my own salt.

Kirstin: But you made eclairs!

Maureen: That’s not the same. Let me see what does he tell you for the salt recipe? You a litre of seawater to get a tablespoon of salt. Are you kidding me?

Kirstin: I liked making Jamie’s butter last year, but I think that just looks silly! That said, I have brought this cookbook into my high rotation collection and will definitely be making some of these recipes again, especially that spaghetti bolognese.

Maureen: I will definitely be making that lamb pie again!

Throughout “The River Cottage Family Cookbook,” Hugh and his co-author, Fizz Carr (and bonus points for having such an awesome name) suggest “Projects” that we can do. The projects are scattered throughout the book and include things such as “Making Butter at Home” or “Hosting a Pancake Race” or “Building a Campfire for Outdoor Cooking.”

The one that takes the prize for “I Will Never In A Million Years Do That” award is “Making Your Own Salt.” As if. I mean, really, he says a litre of sea water will produce about one tablespoon of salt. Why would I go to all of that trouble when I can buy a whole BOX with 250 grams of Maldon Sea Salt goodness from a shop five minutes away? But I digress.

Tim decided that he wanted to tackle the project, “Making Sourdough Bread,” because he had tried (and succeeded) with the same project years ago, B.C. (before children). In those days, we also tried (but failed) to start a wheat farm on a small patch of garden at our house in Chicago. We think we would have succeeded, but for the roofers who didn’t notice the wheat farm. I think that’s a story for another time, however.

Making sourdough bread is a multi-page and multi-day project, because you have to make the starter four days before you’re going to bake the bread. However, once you do have a successful starter, you can save it in the refrigerator for next time, saving you that step. This is what we did years ago, and had many lovely sourdoughs from the same starter.

Did Hugh’s project work? Yes and no. Yes in that we got a loaf of sourdough bread, but no in that it wasn’t an unqualified success. The bread was good, but not, “Blow Your Doors Off” good.

Tim said, “I can’t tell if this is operator error or a recipe error.”

I think the problem might be that once you spend that much time on something, and four days would certainly qualify, you want it to be absolutely perfect. Just a few weekends ago, I made a cake I decided to call “All Day Cake” because it literally took all day. Was it good? It was fine, but it certainly didn’t seem to reflect the amount of effort I put into it, and I think the same is true here.

Will we try again? Sure we will. But we’ll have to start all over again, because we threw out the starter. It might have been cursed or something.

Maureen: Well, we have a number of problems with this recipe, right out of the gate.

Maureen: Well, Hugh wants us to go into our garden and pick our own vegetables for this.

Andrew: And it’s winter! Even if we had a garden, we wouldn’t be able to go out and pick any of them.

Maureen: Precisely. However, I visited the boys at The Creaky Shed and picked out the vegetables from there. Do you think that counts?

Maureen: Hugh also advises that we should make the vegetable prep a family event. He wants us to gather around our picnic table and each of us prepare a vegetable.

Andrew: Well, that would be a problem, since it’s winter. As already discussed.

Maureen: It’s a nice idea, but I couldn’t see it happening, even in the summer. I think I could find more fun family events than cutting up vegetables.

END_OF_DOCUMENT_TOKEN_TO_BE_REPLACED

Today we put the premise to the test: Are these recipes easy enough that children can do them on their own? In the case of the eclairs, the answer unfortunately is no.

The idea behind “The River Cottage Family Cookbook” that children 12 and over should be able to do the recipes on their own, those aged 10-12 would only need a little adult help. My helper Nicholas is only 8, so perhaps he is still young. Also, and perhaps more crucially, eclairs are pretty laborious, so I’m not surprised that he couldn’t do it on his own.

But Nicholas (age 8) did enjoy helping. He had a blast sifting, stirring and breaking up chocolate. At least he did until the time it was to make the cream filling and he said, “I need to go upstairs and have a rest on the sofa.” To be fair, I wanted to join him.

The good thing about this recipe is that it makes eclairs, which can be a bit daunting, seem achievable. In our rush to eat them, the chocolate topping didn’t quite work, but I think that was down to operator error and the rush to eat them. By the next day, with time setting in the refrigerator, it was fine.

I was pretty pleased with the result. When I make them again, I’ll know what pitfalls to avoid and they might look even better. The boys were even more pleased. Nicholas said, “These were even better than I expected, and I expected them to be AMAZING.” Andrew said, “These are BRILLIANT!”

END_OF_DOCUMENT_TOKEN_TO_BE_REPLACED

Maureen: What do you think of the pie? I have to say, using the offcuts to make stars that decorate the top look really nice.

Andrew (12): This is good. I would definitely have it again.

Nicholas (8): Yum. I like the crust better than the lamb, but it’s all good.

Maureen: It must have been so good because they made the lamb mince just for us at Dring’s.

Tim: This is good. It tastes like Nigella’s Keema in a pie.

Maureen: You’re right, it does. All I’d need to do is add some frozen peas, and we’d be there.

END_OF_DOCUMENT_TOKEN_TO_BE_REPLACED

Kirstin: Well I only read at about 5pm that I was supposed to let this simmer for two hours. So I had to be really speedy about getting it on the hob.

Tom: It has made the house smell amazing this evening though.

Kirstin: Hasn’t it just? I have never added milk to a bolognese sauce before and I really think it made it that much yummier.

Tom: Yes, it added a lovely complexity to the sauce.

Ella: I am not a huge fan of gloopy pasta sauces, but I do like this one.

Miles: I absolutely love pasta. And I love this sauce. Look at the way I am noodling the pasta in right now!

Kirstin: You make me laugh, Miles! You really do! Look at that sauce all over your chin too!

Tim: What do you think of the stew?

Tim: What does everybody else think?

Andrew: I thought it was alright. I liked the sausages, and I liked the tomatoes, but I didn’t like the beans.

Nicholas (8): I agree with Andrew. I didn’t like the beans.

Maureen: You boys clearly have not had the British classic of Beans on Toast more. Maybe we need to introduce that dish into our regular rotation.

END_OF_DOCUMENT_TOKEN_TO_BE_REPLACED

“Spicy Bean Stew with Sausages” from “The River Cottage Family Cookbook”
A cookbook a month
Blog at WordPress.com.