Really, this is just a fancy meat sauce for pasta, but oh my goodness, this was so good that this cookbook has already paid for itself in good eating just in this one recipe alone.

Like all good long-and-slow recipes– it took about four hours in all– it was bit of a faff up front, especially with all the chopping for the soffritto. But it was utterly worth it. I was surprised to see that the chopped up onions, carrots and celery and almost disappeared into the meat sauce by the time it was done cooking. The long and slow method also enabled all of the ingredients to really get to know one another to become one delicious unit.

However, and this is a biggie, I need to add a caveat: I really was utterly confused by the size of the citrus zest required. It said I needed a 28cm by 8 cm strip of zest– one of lemon, another of orange. I’m sure it was a typo. At least, I hope it was a typo. How in the world would I be able to get a lemon or orange that size? (Spoiler alert: I couldn’t.) I did look high and low on the Internet for some sort of clarification or correction on this, but couldn’t find anything. In the end, I cut about eight strips of zest off of both a lemon and an orange. It certainly seemed to work, though I’d still like to know how much I really need.

This does reintroduce the question of what happens when a book has a typo. I know it’s been tested and edited and proofread, but hey, mistakes happen. But in this day and age, you’d think the publisher would be able to put out some sort of notice somewhere. When Gizzi Erskine had a typo for her Black Velvet Cake in “Gizzi’s Healthy Appetite”, she put a correction on her Instagram account. For me, the correction came too late and the cake was an utter disaster, but at least the correction was out there.

That problem aside, this was utterly amazing. Sure, it took about four hours, which is not the sort of time commitment you can make on a weekday afternoon. But on a rainy Saturday, it was the perfect thing to have bubbling away on the stove while we got on with other things. (Some of us watched the Master’s. Some of us went to the pub. I’ll leave it to you to decide what I did.) Also, we had enough leftovers to have it again, though I did have to bulk it up a bit with a can of chopped tomatoes.

Sure, there are loads of other beef sauce recipes out there that can be done easier and quicker. But they couldn’t possibly be better than this. We thought it was perfection. Highly recommended.

A Question for our American Readers who have this book: Can you please check the recipe that’s in your addition? Anne from Australia said that in her edition it calls for the same zest measurements, but she guessed– and I agree– that perhaps they ran into problems when they converted it to metric. So I’d be curious to hear what it says in the U.S. book. I’ll post the answer here if anyone has it. Thank you! 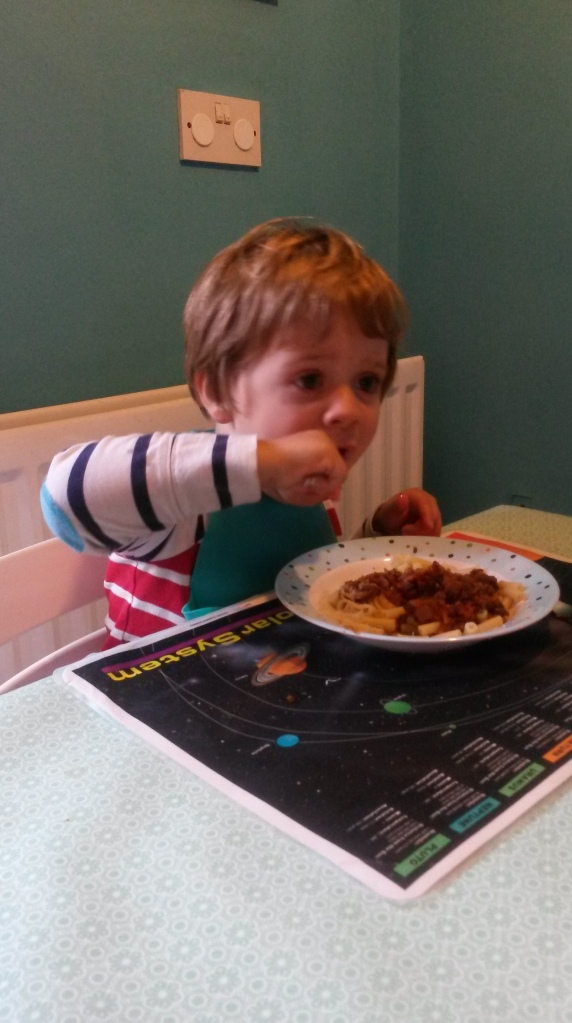 Anna: I’m making normal pasta for the kids. Would you like spaghetti or do you want to try the courgette spaghetti?

Peter: In for a penny and all that.

Louis: I like it. Please can I have some more?

Peter: Isabella likes it too!

Anna: That’s good, because it’s got lots of grated carrots in it.

Peter: So how is it different from your normal bolognese?

Anna: It’s not really. Beef mince, onions, wine, tomatoes, cook for hours, add grated carrots… Normally the carrots are added at the beginning as a sofrito, so I guess that’s the only difference. It makes it a little more healthy, not that you can tell. I would definitely make this again. It was certainly very easy.

Peter: You can tell this isn’t spaghetti.

Anna: Yes, you can. I’m confused by this courgette spaghetti. They say to warm it up in butter but I wonder whether I should have blanched it in boiling water for a minute, just to soften it. Though that might have made it mushy and horrible. I need to give it another go. So far, unconvinced.

“Beef Ragu and Courgetti” from “The Art of Eating Well”

Anna: It’s very annoying, but I compare every recipe like this to sausage sauce. It is made with sausages after all, and I make sausage sauce every couple of weeks, so it’s inevitable.

Anna: That will be the chunky carrots and celery.

Anna: I’d probably like it more if I had never had sausage sauce. But whilst it’s fine, I’m just finding it a bit…. unrefined? Rustic? Not as nice I guess. Plus I’m not a huge rigatoni fan. You shouldn’t need a knife and fork to eat pasta!