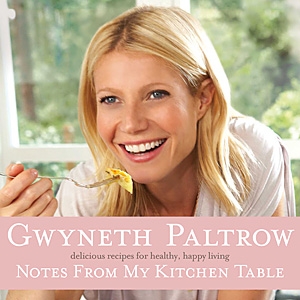 Kirstin: This book has been sitting on my shelves for a good long while now and while I wasn’t convinced before, I am now!

Maureen: I got it as a Christmas present from my friend Anne. Brave woman, giving me a cookbook since I have more than 130, but I was willing to give it a go. I was pleasantly surprised that there were some really good recipes in it. But there also were a few that just didn’t work. Just like many cookbooks.

Kirstin: Tthat salmon teriyaki has actually been requested by Ella on a weekly basis since I first made it. That makes it worth the price of the book, if you ask me!

Maureen: The vegetarian chilli was a real winner. I’m definitely going to make it again. The roasted chicken was also good. It annoyed me, though, that she had so many recipes using lobster, tuna and dover sole. Maybe in your life, Gwyneth, but not in mine. If only I were millionaire movie star married to a millionaire rock star.

Kirstin: She talks about her family a lot. There’s also a lot of pictures of her in the book, which may or may not have been necessary.

Maureen: Isn’t it strange she doesn’t once mention her husband, Chris Martin of Coldplay? She talked about her parents ad naseaum and even talks about her children, but he doesn’t feature at all. It’s almost as if he got a proof of the book, took a red pen, and crossed out all references to himself.

Kirstin: I agree. That was strange.

Maureen: I hear Gwyneth has a new book out later this year.

Kirstin: I might be tempted to have a peek at it and who knows, maybe even buy it!

Maureen: I’m not so sure. If it calls for more lobster and tuna, the answer is no.

“Notes from my Kitchen Table” by Gwyneth Paltrow: Our Conclusion

“Gwyneth Paltrow’s Notes from my Kitchen Table” – Our Verdict

Tim: Yuck. No thank you. (As he eats the leftover vegetarian chilli instead.)

Maureen: I don’t know what’s wrong with you. Tomato soup is great. What do you boys think?

Nicholas (9): I’m really not in the mood for this. I want something I can chew on.

Tim: That’s exactly how I feel, Nicholas. You know, when I was out today, getting my lunch, they had tomato soup on the menu and I thought, “That’s not a meal. That’s just hot liquid.”

Nicholas (with great drama): I really don’t like this.

Tim: We don’t need the drama, Nicholas. If you don’t like it, go make yourself a bowl of cereal instead.

Nicholas: Not today, I don’t.

Maureen: This is good, but you have to realise that I love all forms of tomato soup. It brings back my childhood when we ate a lot of Campbell’s Tomato Soup, and even collected the labels for our school so we could get school equipment. 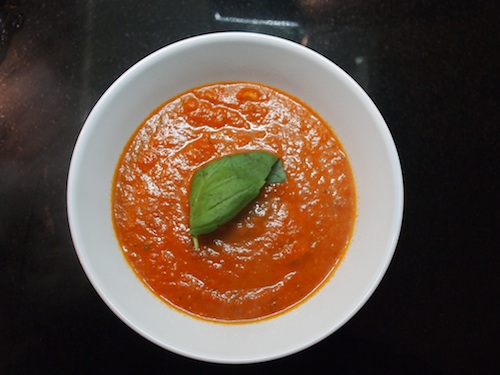 END_OF_DOCUMENT_TOKEN_TO_BE_REPLACED

For the past six months or so, we’ve been trying to become more vegetarian. This can be difficult for us, given that we are omnivores, but we are tying to do it just the same. For me, this means I’m generally trying to be vegetarian at lunch, except for the times when we have leftovers for dinner. For the rest of the family, this involved the introduction of “Meat Free Monday.”

We’ve had good success with Meat Free Monday since September. When it was first launched by the McCartney family in 2009, the boys declared that it would be “impossible” for us to do Meat Free Mondays. At the time, that was true because Monday was “Hot Dog Night” after racing back from a full afternoon of swimming lessons. But that’s no longer true, so now we are trying in earnest. For the most part, we are following it. There are the odd Mondays when it doesn’t happen, like the time we had to eat some Sausage of the Month sausages we had bought at Dring’s over the weekend but wanted to eat before they went off. But for the most part, we are on board. 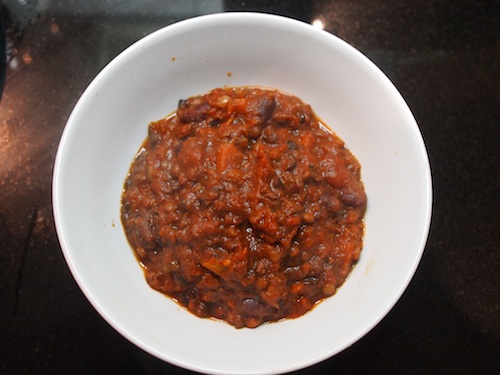 It was hale and hearty, which is what you need in a cold January. By using three different kinds of beans, it was very filling. It also had a nice kick to it, but that might have more to do with my liberal inclusion of chilli flakes, and less to do with the recipe. I would definitely make this again, and might even use this version more often than our usual meat chilli recipe.

END_OF_DOCUMENT_TOKEN_TO_BE_REPLACED

“Vegetarian Chilli” from “Notes From My Kitchen Table”

Want to make your own fish stew, maybe because you’re starting your own Fish Friday? Click through this link for the recipe.

Tim: I think it’s a good idea. There’s no reason not to, given that we have a great fishmonger, called conveniently The Fishmonger— just up the hill.

Maureen: We just need to form the habit of doing it, and then we’ll do it and not even think about it. Like Pizza Night on Saturday, which we’ve been doing since 1995. Or Meat Free Monday, which we started in earnest last year.

Tim: Meat Free Monday didn’t go so brilliantly this week, since we decided to have the Sausage of the Month from Dring’s for dinner on Monday.

Maureen: Well, that’s true. But we just moved Meat Free Monday to Tuesday this week. No biggie. So what do we think of the fish stew? 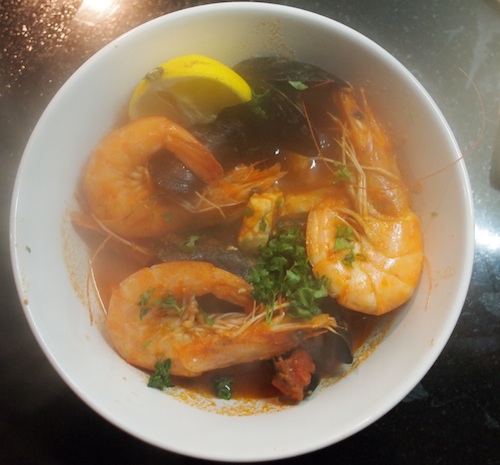 Sorry for the foggy lens. That was due to the steam rising up from the dish. At least you know it was hot!

Tim: I love it. Though you know I love stuff like this.

Maureen: What about you boys? Please bear in mind that I made it nice and easy for you to eat– I took all of the fish that were in shells out of them. So all you have to do is eat.

END_OF_DOCUMENT_TOKEN_TO_BE_REPLACED

“Fish Stew” from “Notes From My Kitchen Table”

Maureen: Well, I call it lemon spaghetti, but it’s got an Italian name. (Finds cookbook to see what the official name is.) It is Spaghetti Limone Parmeggiano. Just like I said. Lemon spaghetti.

Maureen: I agree. I like this. Though I”m not really sure it merits its own recipe in a cookbook. I could do it in four sentences: Cook spaghetti. Make sauce by grating lemon and adding a massive amount of cheese, some olive oil and a splash of pasta water. Mix spaghetti into sauce and put basil leaves on top. Enjoy.

Nicholas: I would eat this again.

Maureen: I’m not surprised you would. But like I said it’s not like the wheel has been reinvented or anything. Saying that, it’s not nearly as boring as I thought it would be. It’s very nice. 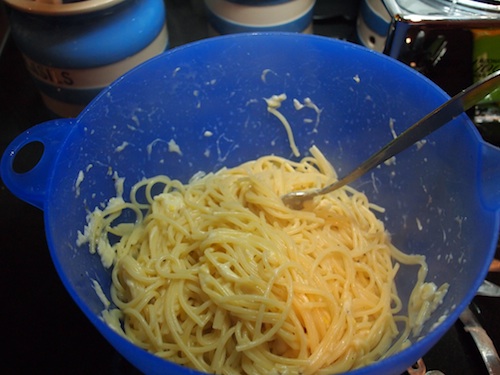 “Spaghetti Limone Parmeggiano” from “Notes From My Kitchen Table”

Andrew (13, surprised he agrees with his brother): It was very good! Nice and tender.

Nicholas: Can I have some more chicken? 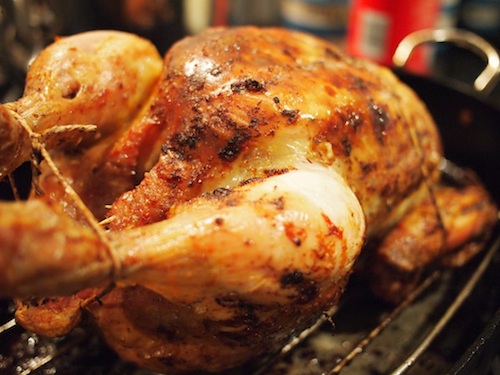 Maureen: You have to finish your cauliflower and your brussel sprouts first.

Nicholas: But the cauliflower seems burnt.

Maureen: You’re right. It does seem burnt. It was much better before. Gwyneth totally got the timings wrong on that one. We loved snacking on it when it was only 10 minutes in a 200C oven. But she said it should go back in for 25 more minutes at 235C. Big mistake.

END_OF_DOCUMENT_TOKEN_TO_BE_REPLACED

Kirstin: These were wonderful. And perfect for a snowy Sunday. 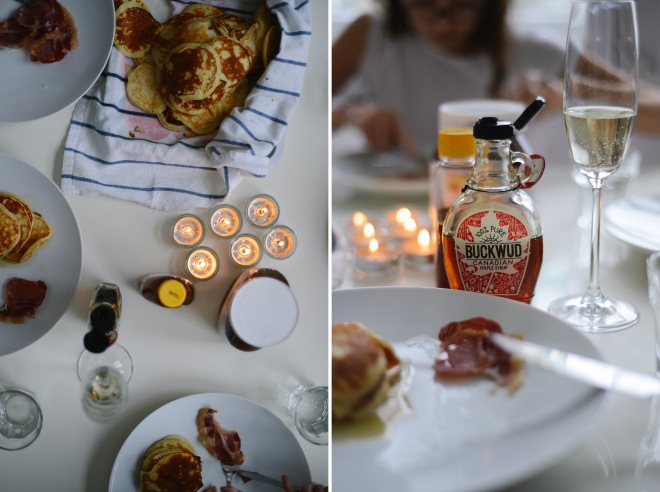 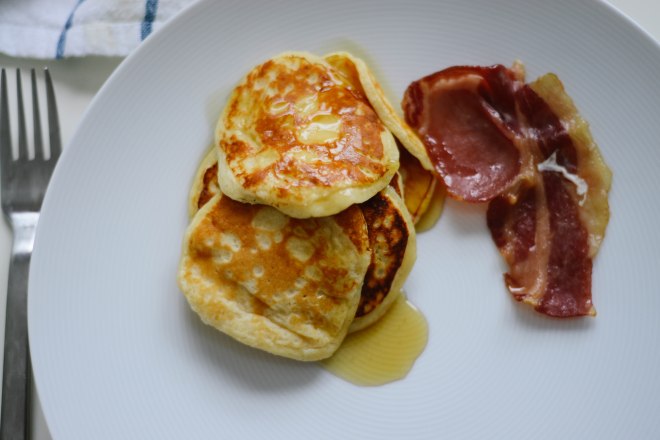 “Bruce Paltrow’s world-famous pancakes” from “Notes from my Kitchen Table”
A cookbook a month
Blog at WordPress.com.