I look at the picture for my grasshopper slices and can think of only one thing: There’s a whole afternoon of my life wasted that I’ll never get back.

Dear readers, it was a disaster.

Yes, they look pretty. Yes, it is the classic tasty combination of mint and chocolate. Yes, some people even seemed to think they tasted good. But I didn’t agree with them. I certainly won’t be making them again. 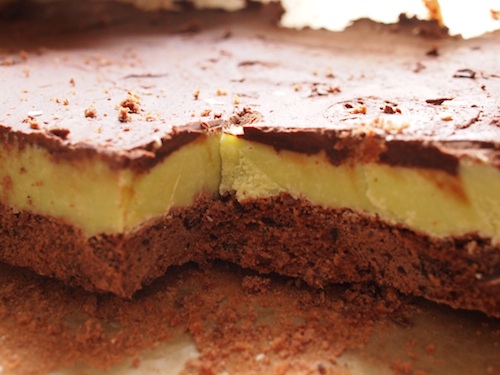 Where did it all go so horribly wrong? I’m not sure, but I’ll try to figure it out.

First, with the ingredients. You need 1 kilogram of what is described as “good-quality white chocolate.” When I went to my local store, I had two choices when it came to picking said chocolate: the Doctor Oetker for 38 pence per 100 grams (total cost £3.80), or the fancy Lindt for £1.09 (total cost £10.90).

Going for the cheaper chocolate might have been a mistake. But there was no way I was going to invest– and invest is exactly the right word– in just one ingredient for a recipe I hadn’t tried. When it came time to make the mint ganache, by heating the double cream and adding it to the chopped white chocolate– it became a culinary disaster. The chocolate separated and the ingredients refused to combine. I stuck the whole mess in the refrigerator out of frustration and by the time it was time to assemble the slices, there was a whole layer of gunk on top of the mix, which I just skimmed off, threw away and tried to forget all about it.

The brownies weren’t as a big as a disaster as the mint ganache layer, but they too proved to be a headache. This could have been down either to operator error or bad instructions, or a combination of them both. But the brownies were dry and not at all good.

So all in all, a disaster. I won’t be making this ever again.