Maureen: According to Gwyneth, this is supposed to be, “Italian comfort food done in gluten-free style.” The only problem is I didn’t make it in gluten free style. I used real flour.

Andrew (Displaying the sarcasm that only a 13-year-old can muster): Oh! The horror!

Maureen: I know. I do actually have rice flour in the cupboard, but I thought, no. I’m just going to use the regular flour. I know that will be fine. What do you think? 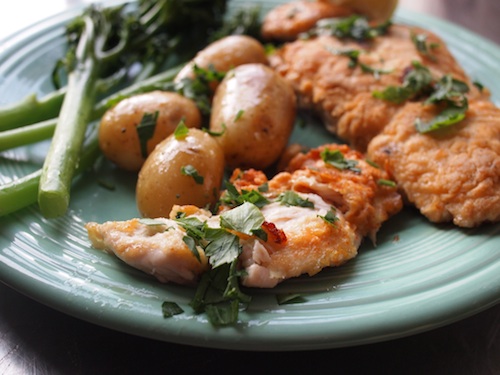 Nicholas (10): I like it because it doesn’t have any complicated flavours.

Maureen: I’m with Andrew. It’s fine, but there’s not much to it. Saying that, though, it would be a quick dinner on nights when I’m short on inspiration.

Nicholas: The asparagus is good too.

Maureen: Enjoy that while you can. That season will be over soon. Should I make this chicken again?

Andrew: Sure. Why not.

Cook’s Notes: As mentioned above, I used regular flour instead of gluten-free flour. I know that Gwyneth wouldn’t approve, but there you go. Also, she advises that you flour the chicken first and then egg it. However, that method didn’t work at all for the first few pieces. So I did what I do when I make chicken parm– I egged it first and then floured it. That definitely worked better in the later rounds.

“Chicken Francese” from “It’s All Good”